#1 by Talvieno
Do you like Cyberpunk? Dystopian worlds? Pixel art?

It's a theme we all know quite well. Sci-fi and pixel art seem to go together like bread and butter. There have been plenty of pixel art sci-fi games out there: VA-11 Hall-A, Caves of Qud, VVVVVV, Axiom Verge, and Into the Breach name just a few that come to mind. Cyberpunk is also a very common theme: dystopian world, struggling to make sense of a post-modern society in a disintegrating environment. "Pixel art cyberpunk" isn't that eye-catching - it's nothing "new".

So, how about dystopian pixel art cyberpunk in true 3D with high-res lighting and shaders?

For people that like immersive stories with a great sense of atmosphere, it seems to be well worth keeping an eye on. The steam page is here. No release date that I can find, but it's been in development for a couple years at least.

edit: Release date seems to be sometime this year.
Have a question? Send me a PM! || I have a Patreon page up for REKT now! || People talking in IRC over the past two hours:

#2 by Flatfingers
I'm not sure about the pixel art, but that lighting is extraordinary -- I wish BethSoft's Fallout games looked so good!

Thanks for posting this.

#3 by Talvieno
Was looking for news and found this article from a year ago: 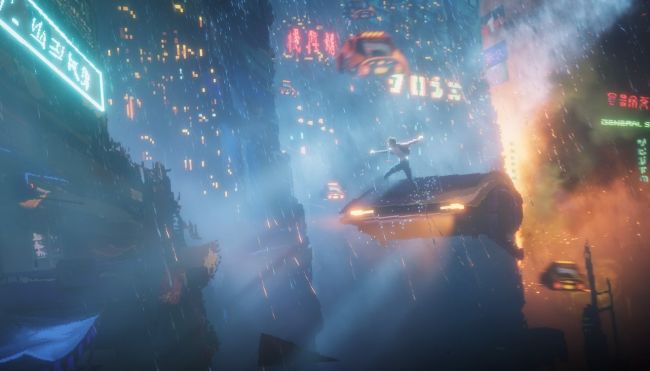 Open-world cyberpunk platformer The Last Night has run into "massive business, legal and funding issues" and is looking to raise more money, its creator Tim Soret has said.

It was initially due to be released in 2018, but that was pushed back, and the team also had to cancel a new trailer that they planned to reveal at this year's The Game Awards, Soret said on Twitter. He said he "can't talk about" the issues that his studio Odd Tales ran into, and asked potential investors to get in touch. 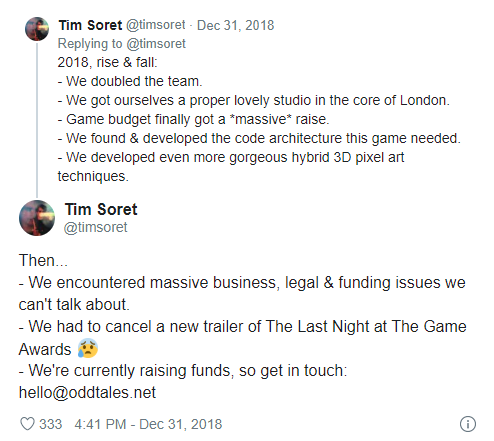 The Last Night was revealed last year, and Soret promised it'd be a "cinematic adventure game" in the same style as Flashback, the classic 1992 platformer. Since then, it has been wishlisted 186,000 times on Steam.

Can't find anything else about it. Really hope it didn't tank out, because it looks so pretty.
Have a question? Send me a PM! || I have a Patreon page up for REKT now! || People talking in IRC over the past two hours: