#376 by Flatfingers
Thanks, Dino and Silver. My examples were mostly just examples supporting my larger "where's a one-page 'stuff you need to know' doc?" question, but I appreciate the specific comments.

I should probably add that I never have disabled the tutorial bot, and I read/listen to the text. I just never heard it clearly state the kind of info I was asking about.

Finally, multiplayer is probably good advice, but I only play single-player games so not an option.

All that said, I really do appreciate y'all taking the time to reply -- thanks.

Still looking for that short list of plainly-stated "here's the basic stuff you really need to know" bullet points, though.

#377 by Dinosawer
I indeed pointed at the tutorial bot because it walked me through some of the questions you raised (starbases, ship info, building defences etc)
Other than that, there's https://stellaris.paradoxwikis.com/Beginner's_guide
There's so much stuff in the game I found it easiest to just look stuff up as I go because it's too much to remember in one go (I'm currently 31 hours in and still in the midgame of my first playthrough

). The tutorial was fairly good at giving me new things to care about when they became relevant (though I did have to go look up stuff about it on the wiki, it's a bit brief at times)
Warning: do not ask about physics unless you really want to know about physics.
The LT IRC / Alternate link || The REKT Wiki || PUDDING

#378 by Flatfingers
Ah, that's what I was looking for -- the Basic Gameplay Concepts and Early Game sections in particular were helpful.

One note: several years into my game last night, after claiming several systems, the infobot finally piped up with, "Hey, you might want to claim some systems by building starbases!" Thanks, infobot. Very helpful.

Next immediate challenges: figure out how to increase Administrative Capacity and grow pops....

#379 by Silverware
Admin Capacity happens over time mostly through Society Research, dont bother with the ascension perk for it.

Population grows automatically over time, you can set food policy to Extra food, for a marked increase in food consumption, but an increase in Pop Growth and Organic Happiness.

You can target Society research for specific boosts to pop growth, including one that happens in the first dozen or so displayed techs, for a flat 10% boost, getting access to Gene Clinics, or Cloning Vats also allows you to build buildings that give jobs that increase Pop Growth.

As a side note, this mod is invaluable. https://steamcommunity.com/sharedfiles/ ... 1585106954
Ironman and Achievement compatible, it tells you what output each job for each building has on the building description, so you don't need to guess.
°˖✧◝(ಠ‸ಠ)◜✧˖°
WebGL Spaceships and Trails
<Cuisinart8> apparently without the demon driving him around Silver has the intelligence of a botched lobotomy patient ~ Mar 04 2020
console.log(`What's all ${this} ${Date.now()}`);

From the conversations in this thread, I'd hoped I could find some useful advice. Was not disappointed.

I told Stellaris to give me a medium-size galaxy and four opponents, thinking that this would give my empire the time it needed to grow before I'd have to start doing diplomacy stuff to ward off stupidly random wars.

Except that suddenly, about 24 game years in, all of these guys appear at almost exactly the same time to my science ships. Over the next year or so, I discover that my poor Olthari Directorate is almost entirely bracketed by large, well-developed empires. 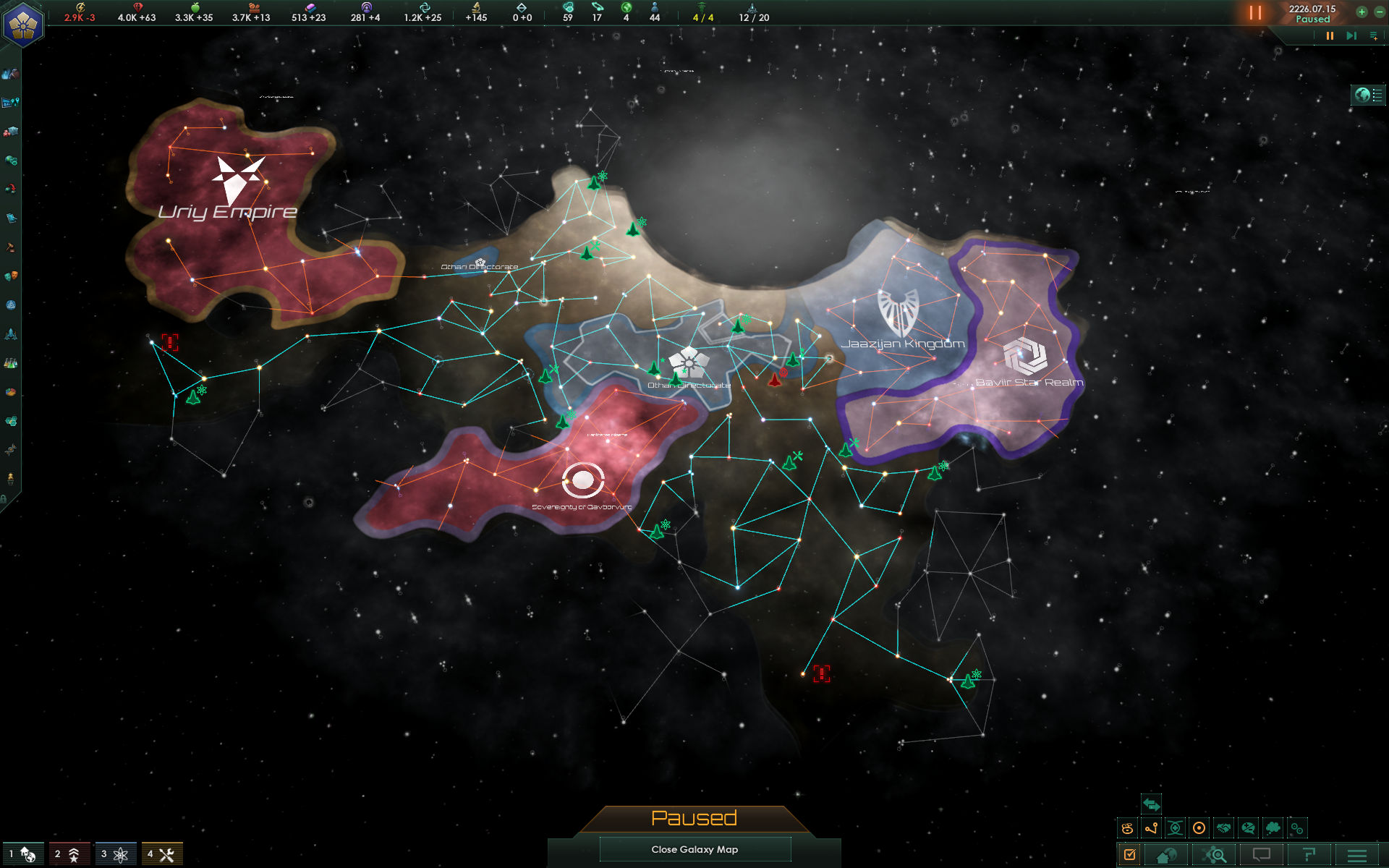 Surely this can't be the game's designer deciding that the game, at a quarter of the way into the first century, should magically create empires equal in strength to the player's own all around the player, rather than starting every AI-controlled civ roughly equidistant from the others as a 4X player might reasonably expect. Right?

I find it hard to believe Paradox would do something so heavy-handed and unfair. But I look at this -- big empires suddenly popping up right next to mine rather than spread out through the whole galaxy -- and I honestly don't know what to think.

Am I mistaken, and this is just a random weird event? Or is this how Stellaris actually is designed?

#382 by Talvieno
It's how Stellaris is designed. Wasn't always that way. Basically, you got in contact with another empire that happened to be friends with a number of empires, and they said "here, talk to our friends". But yes, it used to be that you could reach other civilizations before they had a chance to expand much. That was back when other modes of travel was a thing. With hyperspace-only it's quite easy to get locked into your starting system, and much harder to happen across alien species early.

Keep in mind that it also didn't start as a 4X game, and wasn't originally intended to be one at all. When the original guys left and the new devs took over, they decided they wanted it to purely be a 4X instead. IMO they've done a fairly messy job of converting it. (I also strongly disagree with the act of converting it in the first place, but that's an argument for another time.)
Have a question? Send me a PM! || I have a Patreon page up for REKT now! || People talking in IRC over the past two hours:

#383 by Silverware
Also the game tries to assign AI races near you so that you always start out with diplomatic options fairly early.

Have a look through the mods, there are a lot that fix things like this.
°˖✧◝(ಠ‸ಠ)◜✧˖°
WebGL Spaceships and Trails
<Cuisinart8> apparently without the demon driving him around Silver has the intelligence of a botched lobotomy patient ~ Mar 04 2020
console.log(`What's all ${this} ${Date.now()}`);

#384 by Flatfingers
Fair points. Maybe the conversion toward 4Xness is why I bounced off of it when I tried to play it after it first came out, but I've really been enjoying the Expand and Explore aspects while they lasted.

Regarding mods, it's probably a dumb quirk, but I like to play through a game the first time modless -- experiencing it as its designers intended, even if that leaves some rough edges. After I finally complete this playthrough (probably sometime in 2021), it's mods ahoy.

One last thing: it caught my notice a couple nights ago that I wasn't getting any Steam achievements. When I was starting up a test new game earlier tonight (to verify the game startup options like galaxy size and number of AI opponents), I noticed in big red letters at the bottom of the new game screen a sentence to the effect that "achievements are disabled for this game." Nothing I did, no option of any kind, seemed to allow achievements.

I did also notice the tooltip eventually added "Ironman is disabled." A little online reading seems to be saying that achievements are only allowed if Ironman mode is enabled!

#385 by Dinosawer
Yeah I found that kinda odd as well.
By the way, you can kinda 'reserve' the areas you explored for further expansion by claiming the systems on the border of the other empires so they can't get there anymore.
Bit more expensive in influence, of course, since they aren't directly connected to yours.

#386 by Cornflakes_91
eh, your situation doesnt look that bad, you have plenty of space to expand there.
cut the [indecipherable] concordate(?) off by building outposts in the systems where your two southern science ships are and you have mostly uncontested access to two big arms east and west of your realm.

despite it looking like you're pretty boxed in, you have a lot of space because the hyperlanes dont connect southwards from the two eastern civilisations.
expand east, block the concordate with one station, done

and i think its because ironman deactivates console commands

#387 by Damocles
just saw a commercial for another update, but I dont have time! They trick me into buying more content ... angry.

Flatfingers wrote: ↑
Fri May 17, 2019 2:23 am
Regarding mods, it's probably a dumb quirk, but I like to play through a game the first time modless -- experiencing it as its designers intended, even if that leaves some rough edges. After I finally complete this playthrough (probably sometime in 2021), it's mods ahoy.

Not that odd, in my opinion. I rarely use mods of any kind except graphics mods.

I like my games to be balanced as the designers intended, always. If the game needs mods to be fun, I usually don't play them to begin with.

About achievements: I tried it once in Ironman mode to see if I could pick up some achievements, and what followed was probably my most memorable and enjoyable game. It seems I like it a lot better when there's no hope of a reload.

Much more tension and risk, I suppose. It just feels more exciting to me. Definitely an odd design choice, though.
Have a question? Send me a PM! || I have a Patreon page up for REKT now! || People talking in IRC over the past two hours:

#389 by Flatfingers
Bounding in that civ below mine is exactly what I've been up to.

See those constructor ships to the northwest and east of the Sovereignty of Qavborvurg? That's exactly why they're there.

Since posting that screenshot last night, I finally gained enough Influence to build an outpost to the northwest. The one to the east, I might have to lose some systems on, because I just cannot gain Influence fast enough to grab the system closest to the Sovereignty.

#390 by Silverware
Ironman, and mods that don't impact gameplay (well, technically the hash)
Thats the requirements for Achievements, you can set all the other settings to anything, including 0 enemies, and 0.25x research. :V
Great options for achievement hunting.
°˖✧◝(ಠ‸ಠ)◜✧˖°
WebGL Spaceships and Trails
<Cuisinart8> apparently without the demon driving him around Silver has the intelligence of a botched lobotomy patient ~ Mar 04 2020
console.log(`What's all ${this} ${Date.now()}`);
Page 26 of 28
411 posts
Post Reply