#301 by Baile nam Fonn
Dwarf psychology has always been a particular strength in the story-making machinery; good to see further iteration and a bit more said about the roadmap!

#302 by Talvieno
Hooray new DF update! This one lets you interact with the hill forts and villages surrounding your fortress. If I remember right, this is the last major update before Toady starts working on the magic system - which I'm very excited about.

Then, after the magic/mythology update, I believe he said that boats were next up on the agenda, and multi-tile creatures. That will be interesting.

Toady One wrote:There are now peaceful and not-so-peaceful ways of expanding your influence in the world. Once a site becomes linked to you (through prosperity or by conquest; you'll see a message), you can send a messenger there to request workers, or send dwarves from the fort out to such sites (from v-p). This only works on historical figures, so you might find you don't have off-site workers available at first, though some sites do have them. This release should also improve the issues dwarves were having with negative thoughts, and they can also now experience permanent changes in their personalities and intellectual values due to events in their lives.

Note: Insurrections were such a problem in sites that I had to turn them off for your fortress's holdings; we'll get back to that later. It wasn't even the insurrections, really; the dwarves were bailing on the occupation immediately because they were afraid of insurrections.

#303 by Prack
Yes I did want to start with a volcano, but this was not exactly what I had in mind 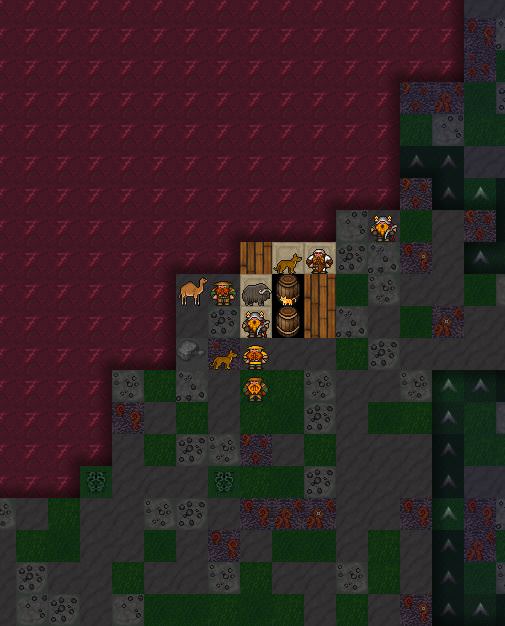 #305 by Talvieno
Toady's devlogs are excellent as usual (although I'm almost a month late with this one).


Toady One wrote:This week involved a lot of bug-fixing from last week, so there's not as much concrete progress to report. For instance, a human trading company called the Present Hall was wildly successful trading various leathers and bones for crafting, and eventually had enough clout to open a branch warehouse inside a dwarf fortress for the first time. Can't resist that draltha leather. This turned out to be a strategic error, as two short years later, a forgotten beast obliterated the fortress, the warehouse, and killed everyone inside. So, what's the correct response? Close the destroyed branch? No, no, you stimulate the (non-existent) economy by hiring local. Forgotten beast, you're the new (ruined) warehouse administrator, congratulations!

That is a lovely embark spot and I envy you the creations you've likely built with it.

#306 by Prack
Much fun has been had there. very carefull fun. Still need to find out if it is a zombie biome though.
So I'm also going very slow.
Oh, and everything has been covered in red and no clean water is to be found

#307 by Talvieno
There's usually clean water in the caverns, if you dare to dig that deep.

Though I did not explore them thoroughly yet, just went by what was revealed upon breaching. They are currently safely behind a raised drawbridge though till I decide to risk it.

#309 by Dinosawer
https://www.rockpapershotgun.com/2019/0 ... m-version/
Huh
Warning: do not ask about physics unless you really want to know about physics.
The LT IRC / Alternate link || The REKT Wiki || PUDDING

#311 by Talvieno
I'm all for anything that helps Dwarf Fortress reach a wider audience.

Really sad to hear about their medical difficulties, though.
Have a question? Send me a PM! || I have a Patreon page up for REKT now! || People talking in IRC over the past two hours:

I enjoyed it as well. Thanks for sharing!

Toady One wrote:Here is the villains release! There are various bits we're going to have to loop back around to after the graphics work is complete (see previous lengthy dev log), so perhaps this should be called the first villains release, or more "the guilds and temples and adventurer parties and pets release which also has artifact heists and extensive historical villainy, with lots of new mostly evil magical stuff", ha ha. We will get to the fortress plots beyond artifact heists when we return, as well as the ability for the adventurer to be a villain and to investigate them more effectively.

The features are listed below. For fortress mode, the most important new elements that will be commonly encountered are petitions for guildhalls and temples. When enough believers or laboring dwarves are in the fort, you'll receive a petition, and it's up to you if you want to try to build the location for them or not. To satisfy the temple petitions, you must assign a priest (the game will remind you with an announcement when your temple is ready for one, after a certain value threshold is crossed.) The main benefits of guildhalls and priests currently is the ability of guild members to share knowledge, and of priests to give inspiring sermons and comfort stressed-out dwarves.

Less commonly, but also important, a villain may target your fortress, especially when you get up to having artifacts they might covet. If you notice an artifact has been stolen in a non-kobold way (the announcements will be different, make sure you have a sheriff to receive the reports), you will be able to interrogate anybody about the crime - witness reports might be useful with a name, or they might just indicate the artifact is missing. Interrogation leads to a report indicator on the left, which you can read in the usual way (with 'r'.) This also opens up the counterintelligence screen, which will keep track of information for you. If you manage to interrogate the handler of any treacherous dwarf, generally on a return visit, you might even get the name of their master, if they have one, or get details of other plots throughout the world, though most of them cannot impact your fort directly (yet.)

Dwarves have some more general relationship types now (especially the historical ones, who can arrive as war buddies or athletic rivals), and they can also have multiple lovers or get divorced or have children before they are married.

Most aquifers in the fort are now slower filling. You still have to act pretty quickly (this makes them remain useful for wells and other liquid matter), but it is very possible to just wall them off or otherwise deal with the water if you are ready. You can still place a wall on top of shallow water. If you want an old-style aquifer, just embark where there's a "heavy aquifer."

Your fort may also be invaded by horrible things if the necromancers or demons have been entertaining themselves.

The main new bit in adventure mode is right in the beginning - well, not quite. Don't be fooled by the first character creation screen (which is unchanged), you'll get to the good stuff right after. There are a lot of new options there (starting background, religion, starting site selection, equipment including quality, mounts/pets), including the option to make party members, who can be from different civilization. Mounts greatly speed up travel if everybody has one (make sure the mount is their pet.) If you forget a mount or meet with tragedy, you can claim a new mount generally from the pastures of human cities, or wherever tame animals can be found. You do not have to purchase them currently. Just press 'h' near one (the same key you use to mount and lead animals.) If the wrong party member claims it, that party member can give it to the right one as a gift (a new conversation option which can be applied to anybody.) Pack animals (including many mounts) can also carry items. Press 'p' to place an item on a creature. This can greatly increase your capacity to carry food or treasure. If you claim a pet that is unnamed, you can name them as a conversation option (with the pet.)

In adventure mode, if you have judge of intent, you'll be able to see the new readout of your conversation partner's mood/relationship with you (without that skill, you still get some basic info.) You have the ability to interrogate people, using the persuade and intimidate skills, though this is limited now because we didn't get to most evidence. People can confess to schemes, and sometimes that'll even be meaningful, but it's mostly a giant mush of data until we add more structure. But it shouldn't be hard to find some even without proper story/evidence hooks - just go to a nearby castle in a human town, and some portion of the nobles and administrators there will be up to something. But it'll be ultimately unsatisfying until we get to more. As a small note, only confessions of schemes will show up in the new adv mode intrigue view currently (confessions of masters/handlers don't have a proper evidence link yet.) Finally, there were a ton of existing conversation options and most are not linked to the new conversation variables (like confidence and agitation and how much they want to leave.) But you should see them in action if you interrogate, argue about values, flatter, tell jokes or pacify. Additionally, depending on personality, most people slowly loses patience with a conversation no matter what the subject is, unless they are kept entertained. These ephemeral conversation values are reset every two hours, so don't worry if you lose a chance to speak to somebody at a given time.

If you want to play with divination dice, you'll need to find a pedestal with some at a shrine. About half of the shrines should have them, though a lot of the smaller road and intersection shrines won't have room and will just have statues. Shrines labeled in text on the travel map have the best chance, since they are large. Temples can also have them in the basement with the relics. To roll dice, make sure they are in your hand and 'I'nteract with them. Rolling should be an option there. Once you do that, the roll announcement has a lot of information. Statues generally give some idea as to whose shrine you are at. Shrines can be both for organized religions or generally to a deity, and both types can have divination traditions.