Things That Made You Happy Today

#1743 by Talvieno
Surviving it doesn't feel like such an achievement anymore.

#1744 by Dinosawer
I survived it as well!
Warning: do not ask about physics unless you really want to know about physics.
The LT IRC / Alternate link || The REKT Wiki || PUDDING

#1745 by Silverware
I did not! But my clone did!
°˖✧◝(ಠ‸ಠ)◜✧˖°
WebGL Spaceships and Trails
<Cuisinart8> apparently without the demon driving him around Silver has the intelligence of a botched lobotomy patient ~ Mar 04 2020
console.log(`What's all ${this} ${Date.now()}`);

*Turns clocks back to mid of last week*

So, last month was a busy one, I'll say. Going to Vienna for a few days, getting stuck at a train station because delayed trains, meeting Cornflakes in person, enjoying the weather and the sights.

Followed not even a full week later by boarding the plane to the far, far east. Once again Tokyo, Japan, to clarify matters. We knew it'd be summer over there but thought that the ca. 36°C from austria prepared us for the asian summer...what a grave mistake! There's not much I can do to describe the incredible weather we encountered when we left the airport...easily over 32°C with a humidity of constant 80% +, dropping to still brooding 27°C with comparable humidity over night. Let's say it was not really comfortable in the first few days.
Those handy fans we bought on the second day coupled with ample use of the umbrella to keep the sun out of my face helped immensely.
But I'm ranting over the weather here...

We went all over the place every day, visiting the pandas in the Ueno-zoo (Who were...extremely lively...not surprising in this heat!), visiting museums and shrines, napping on the train (ahh, how I missed that...

), shopping random things, looking for an oversized kimono I could afford, etc.
On that note, there are many shops where you might find some of those precious, little things: 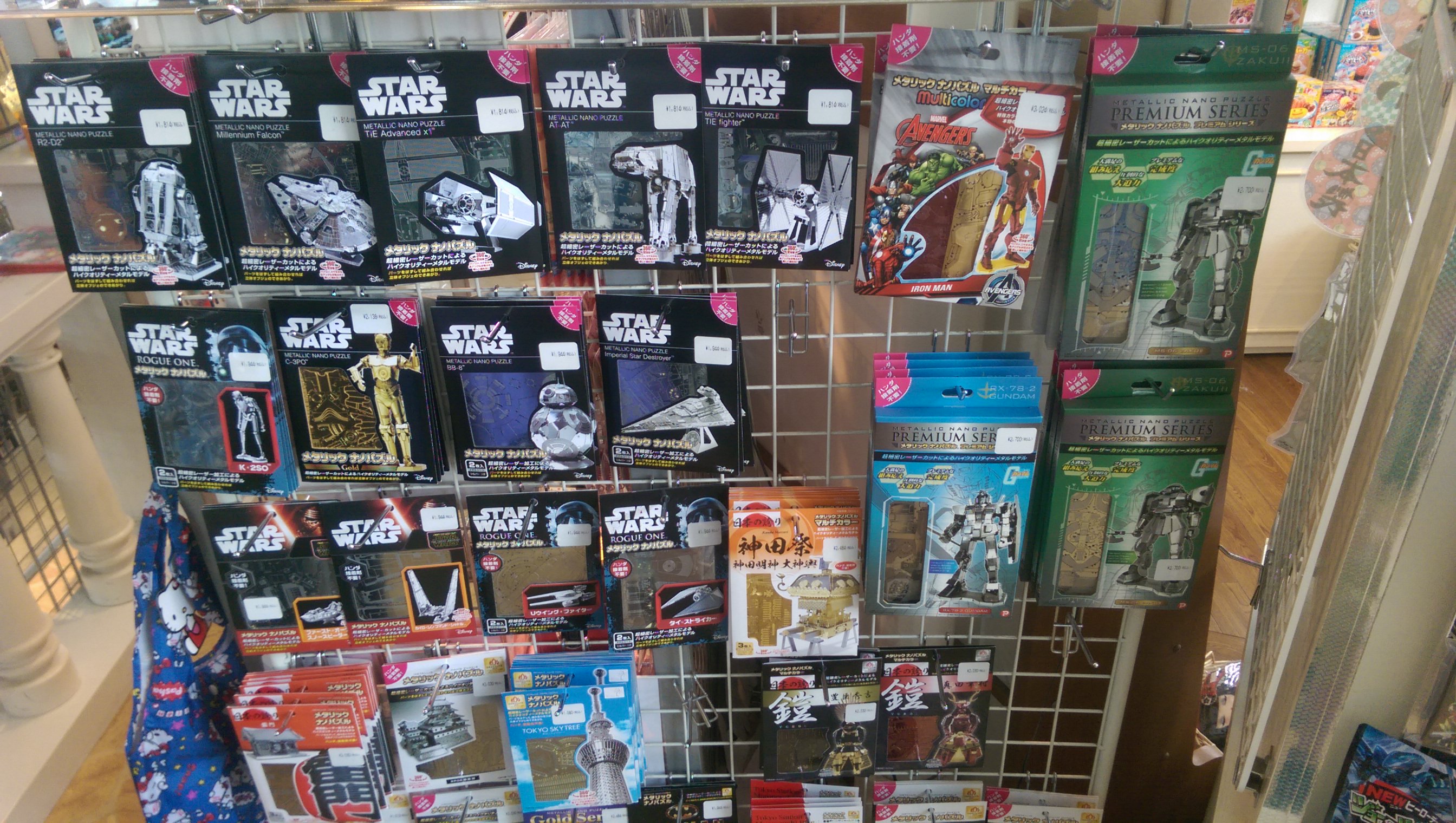 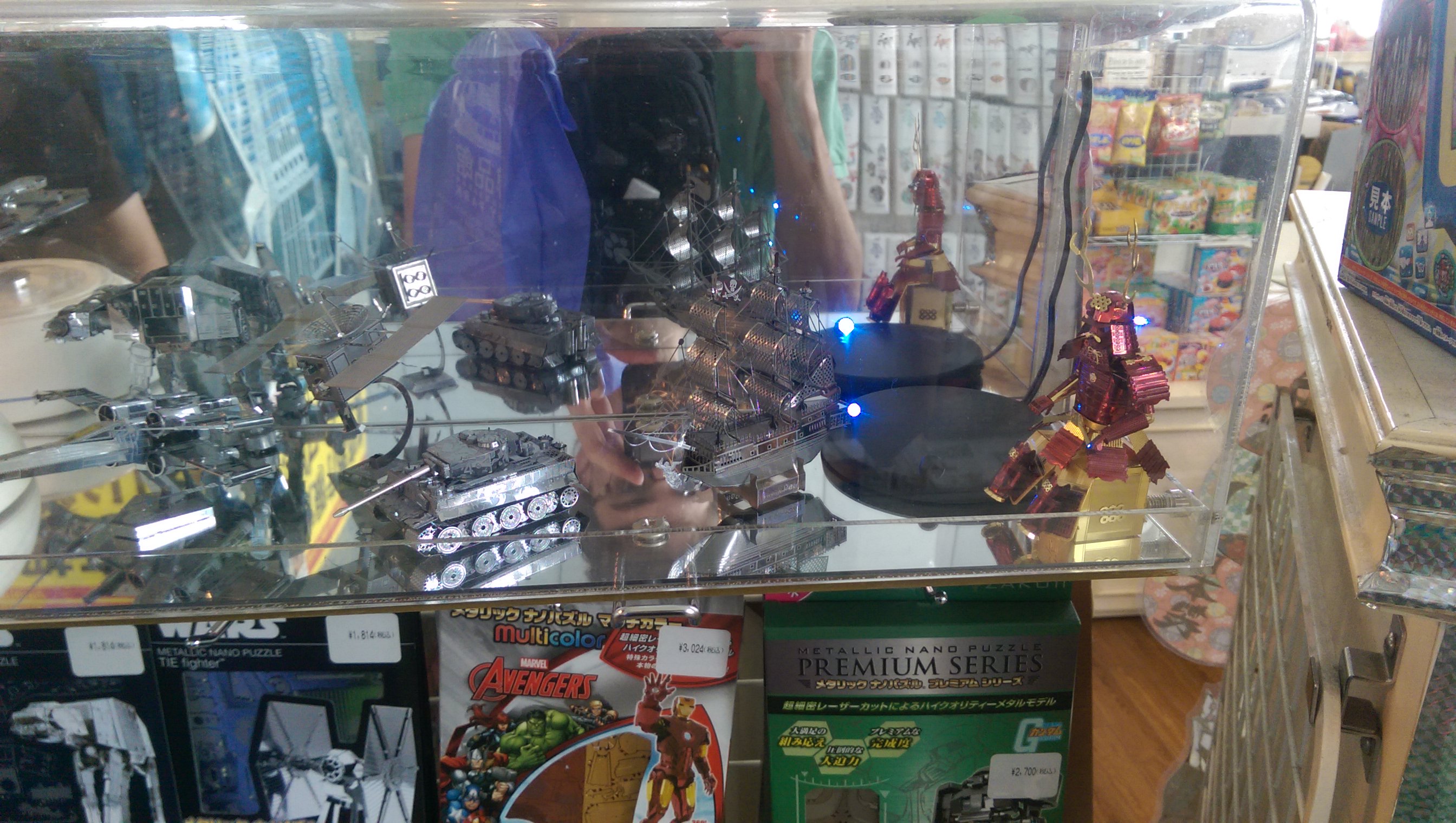 Those are miniature puzzles made of sheet metal. Those are really cool pieces of decoration! (I brought a pagoda-puzzle home. Pretty interesting to put together, but seriously cool.)

On this same day, we got a tip from a friend that there would be some kind of dance-festival in front of the Meiji-shrine in Harajuku. And wow! Some of the participating teams were really awesome!
My favourite participants from this year were a team consisting of students who called themselves "Tokyo Hanabi" (Tokyo Fireworks), employing a pretty impressive design on their outfits and a cool soundtrack.

(I was in the same croud, but a bit further away from the stage. I really enjoyed their act. From my distance, the pouches where they kept those red fans and the clapping things were pretty much invisible. Nice effect when they suddenly had the fans instead of whatever else they just had in their hands. Sadly a lot of the effect gets lost when watched from closer.)

On another note for those who might drop by sometime, there's a pretty cool café in Omotesando, Shibuya.

A busy little place that sells watermelon-flavored icecream in pieces of real watermelon. And it's delicious! 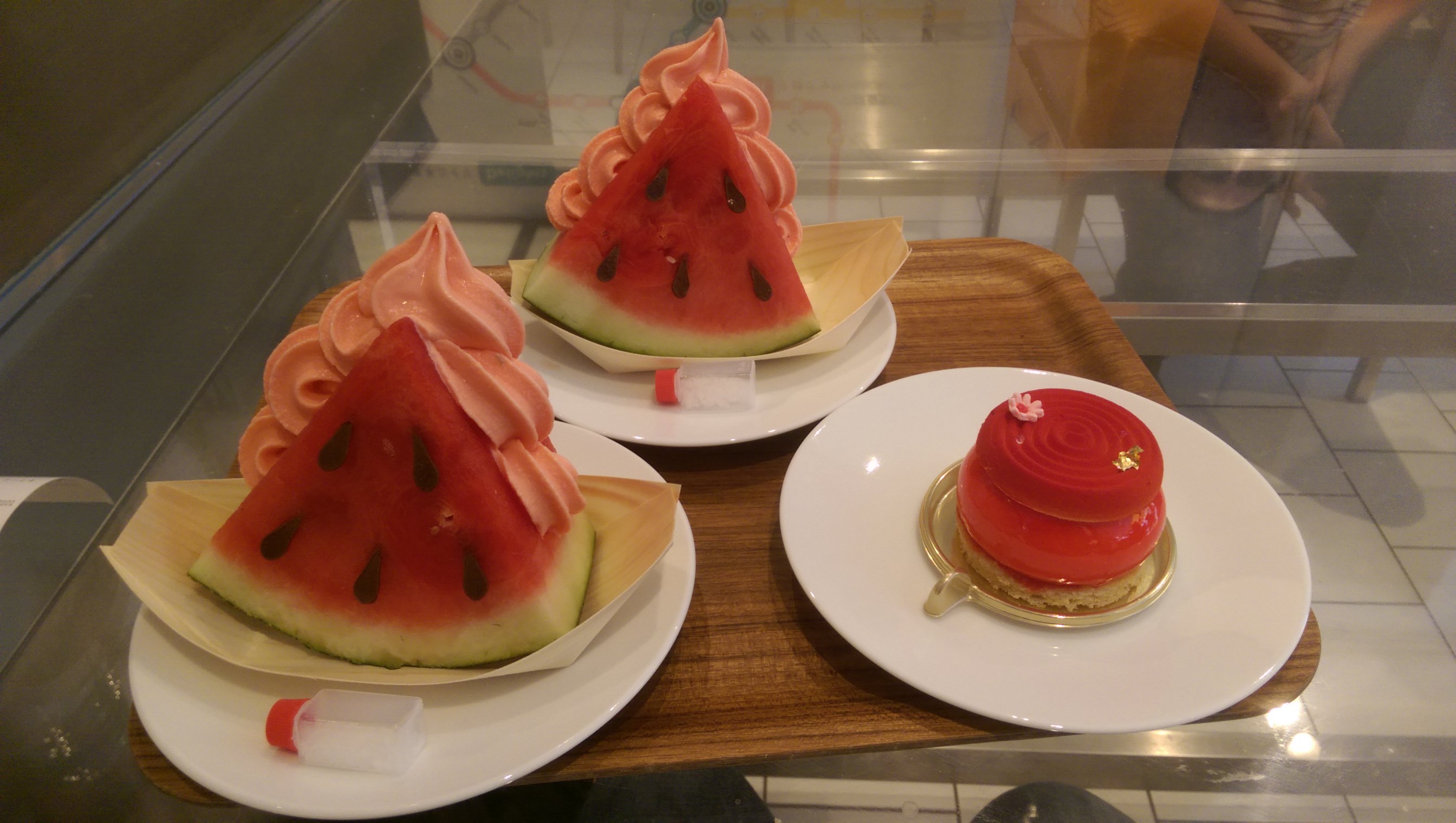 We also hit the karaoke places with some colleagues of our japanese friend. Darn! That was exciting! And extremely fun! Definitely have to repeat that next time.

My brother and I had a bit of an disadvantage, as we're not all that fast with reading japanese text. So we had to cheat a little bit by printing out our songs lyrics beforehand. We looked silly...but it was still awesome!

And for those who'd rather enjoy a more martial side, we visited the local Samurai-museum. They not only show original armors and weapons, they also have a pretty talented guy for a little samurai-show and they trade with all that stuff , too.

(I got to wear the mask and the helmet from the photo below and was allowed to pose with a sword. My brother fumbled those pictures a bit though...So I'll just leave the unworn variant here.) 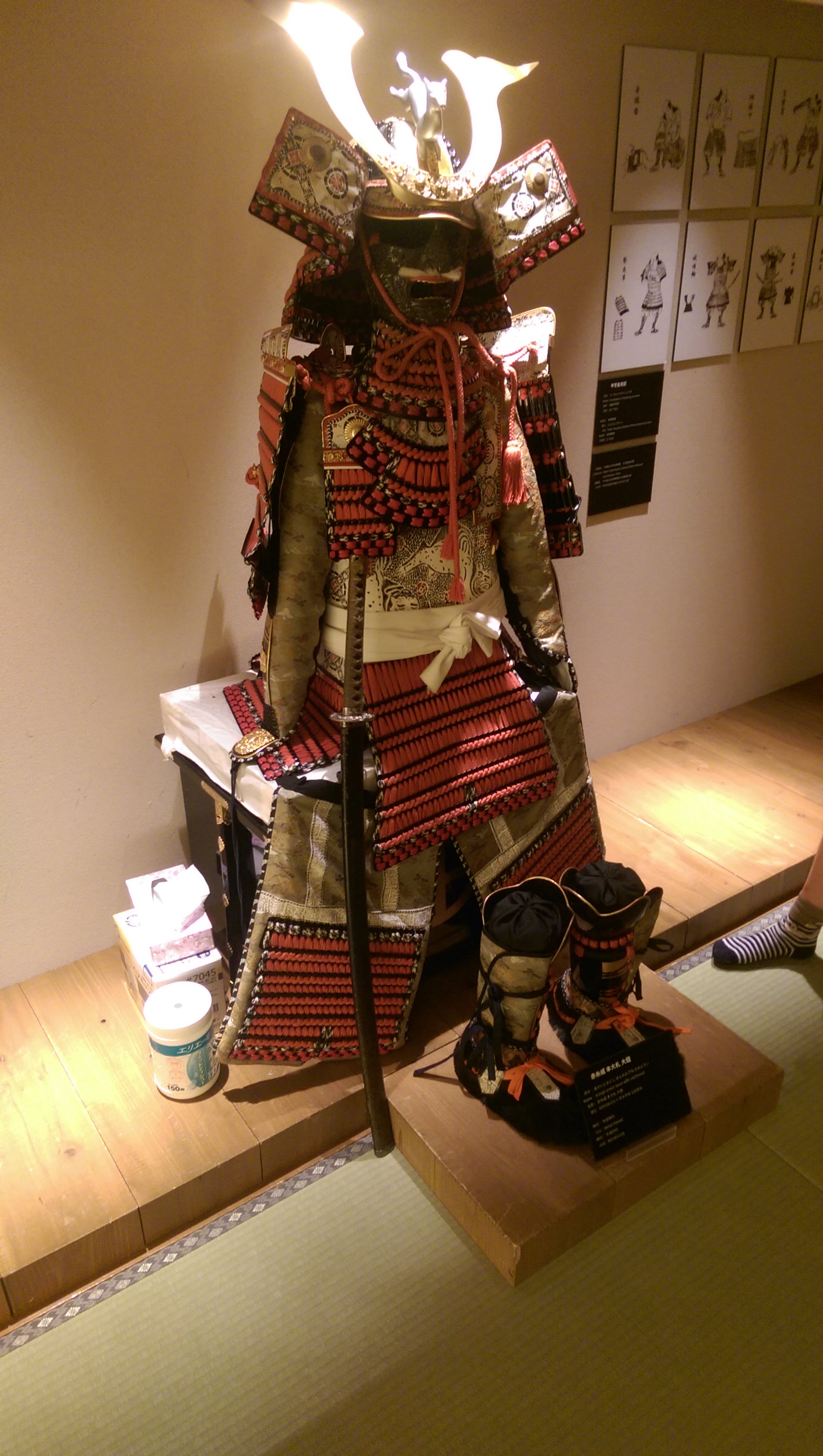 In the last days we also went to Yokohama for a bit. We were a bit surprised that it's so close...not even an hour by train. The overall scale of Tokyo messes horribly with my sense of distance...

And there we even saw another guy who walked his pet bunny in a park. That really attracted a lot of attention.

And they even have an Oktoberfest with beer and german music! Those japanese really like germany it seems! 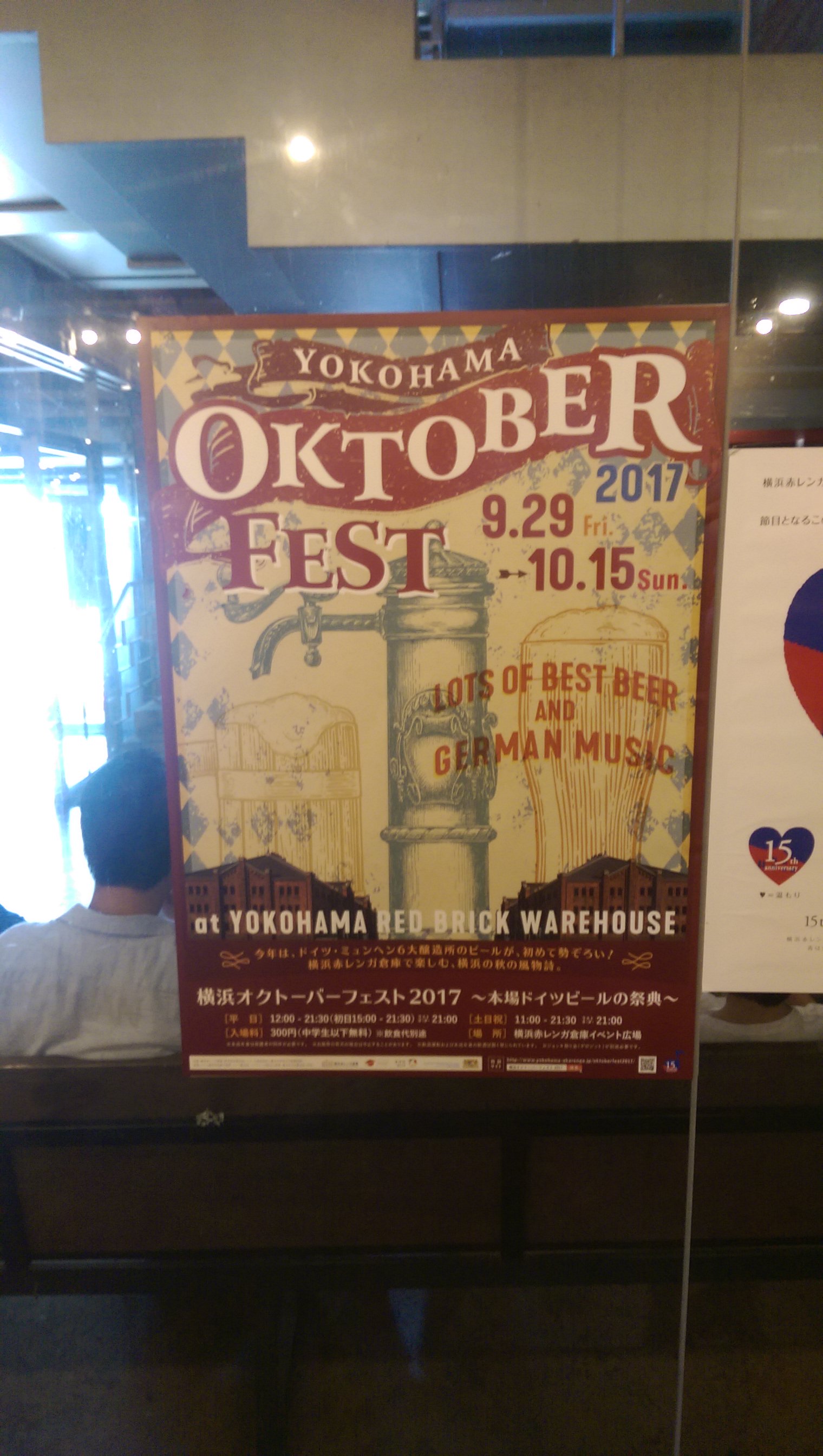 With school and all it'll probably take a while until I can return to dear tokyo. But I enjoyed this second trip just as much as I did the first.

Really, though, that is a wonderful description of your travels, F4wk35. Thanks for posting here!
Victor Tombs
Victor Tombs
Elder Council Member

Flat, expressed in text exactly how I felt.

This is making me feel even more like taking a trip there someday. I've always kind of wanted to, but (obviously) never had the means... or sufficient reason to want to go so far out of my way.

This makes that come a little closer.
Have a question? Send me a PM! || I have a Patreon page up for REKT now! || People talking in IRC over the past two hours:

#1752 by IronDuke
I dusted out my computer with a leaf blower.

Now one of the fans makes an odd noise if left on high, so I had to turn it to low.

Ah well, it's just a generic case fan and isn't even needed. Plus it already made a noise, it's just worse now.

#1753 by DigitalDuck
Thing that made me happy today.
Games I like, in order of how much I like them. (Now permanent and updated regularly!)

Is that an official record?

Is that an official record?