Talvieno wrote: I didn't see where he said that?

Yawyk wrote: First up and as I mentioned fluids...the below kind of a design, with your main mining station taking centre stage surrounded by outer facilities/landing zones make for an interesting look.
I can see similar mining facilities leaving room for Josh's procedurally-generated countryside tech filling in the surrounding area; basically this facility doesn't have to be surrounded by a fluid, if you get my drift.

I honestly think he just meant on a two-dimensional plane, not like it was floating or anything.
Have a question? Send me a PM! || I have a Patreon page up for REKT now! || People talking in IRC over the past two hours:

Talvieno wrote: I honestly think he just meant on a two-dimensional plane, not like it was floating or anything.

i dont care about the floating.

#33 by Flatfingers
Personally, I'm just hoping there are water worlds at whose settlements we can dock.

I've always been fascinated by the idea of living on a world of small archipelagos.

Talvieno wrote: I honestly think he just meant on a two-dimensional plane, not like it was floating or anything.

i dont care about the floating.

i care about using atlantis as mining base

I'd use it as a mining base, if there were good enough resources below. Coolest oil rig ever, yeah?


Flatfingers wrote:I've always been fascinated by the idea of living on a world of small archipelagos.

I'd love the archipelago idea - or even just a floating "getaway resort" would be cool.
Have a question? Send me a PM! || I have a Patreon page up for REKT now! || People talking in IRC over the past two hours:

I sure need to make time to play the various Myst games at some point, always wanted to.

I use the pictures more as a visage of my imagination/thoughts, than reference to Atlantis etc. this is brainstorming after all.

And I agree that fog, rain and sandstorms will make for excellent variety in the daily/weekly look of these cities.

#36 by Talvieno
Gonna throw some more up here. These are from a more "cyberpunk" genre - a futuristic setting where everything's gone to the dogs, more or less. Degrading city quality? Yes please. I imagine that if we paired this with the civilian idea, you could have cities that had experienced low morale more often in their past tend to lean in this direction. That would give you a feel of not only the setting, not only the culture, but also the history of a city... And that just feels amazing to me.

The twisting highways, hovering far above the ground, and the areas of colored light are what really seem to make this picture come alive for me. This one doesn't actually look like much, if you try to take a close look at it - but the dark buildings combined with the lights give it a very shady, dangerous atmosphere, I feel. And those windows are beautiful - I'm sure they could be procedurally generated, though. It's just a matter of overlaying multiple shaded patterns. As for criticism, that building on the left seems to be missing something - I don't think I like that particular part. 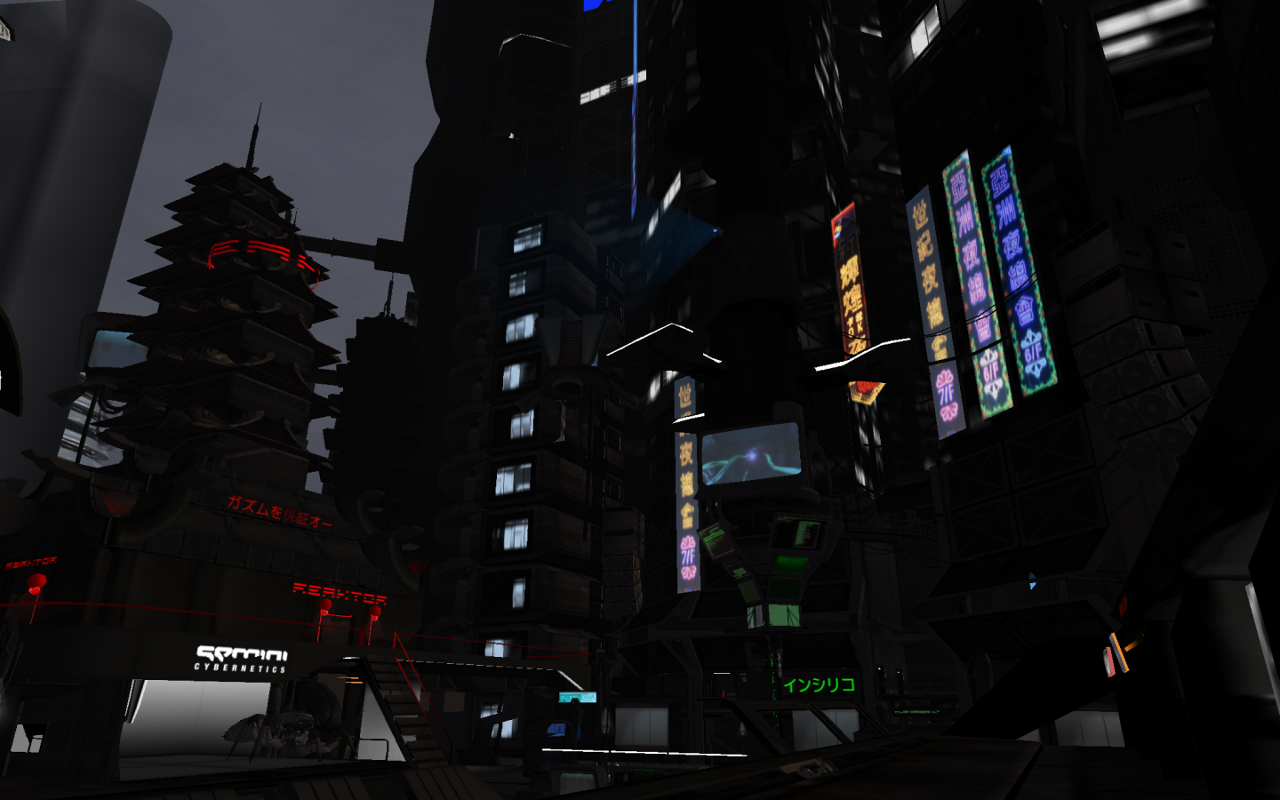 For a city that's absolutely gone to pieces, and nobody is happy, this would probably be about right, as much as I can imagine. The tangled highways and smoggy sky seem just about perfect, though I'll admit I'd like to see a little more color. The key to what "makes" this image, I think, are the tangled highways, the vertical struts everywhere, and the fact that the buildings are lit primarily from below, with a dark blue ambient lighting that falls off as it gets closer to the camera (I'm just working out how we could replicate a similar feel in Limit Theory). Those buildings that have lights lighting up their sides don't have the full side lit, but rather a single small area... The entire image looks chaotic and patchy, and I'm almost certain that the red coloration is a huge part of what makes it look as hopeless as it does. I don't think changing it to green would have quite the same effect. Something different brings this one alive... I don't know if it's the streets (it would be a patchy shader to imitate water, I suppose), or the bright lighting in the background. The grass growing in the streets helps bring a decaying feeling to it, too. But as far as lighting goes, you'll notice it matches most of the other pictures in this series - dark above, and lit from below. That seems to be the real key for making a city feel like it's decaying, other than patchy lighting and dirty textures. Nothing is shiny, everything is falling apart. I like the clusters of folks in the background (I would like to suggest, though, that for LT we don't model humans - that would take far, far to long to release). I'm not sure what the connection between the Chinese culture and space is, but I imagine it would be connected to Blade Runner, which seemed to set the standard for the genre - it's Cyberpunk, too.

This next one isn't quite cyberpunk, but I'm including it anyway. Yes, it's lit from "below", just like all the others - the sunset in the background mysteriously lights only the lower portion of the buildings. The patchy smoke and fog in the distance is what gives it a sense of decay, and not scattered bits of rubble and debris. Patchy seems to be the order of the day when it comes to decay - patchy lighting, patchy smoke, and lit from below. What I really like here, though, are the buildings - the design is beautiful, as is the fact that the skyscrapers are spaced out so you can see them more clearly. I'm not sure how much I like it (I personally like a claustrophobic feel), but for variety, I suppose it's something that could be considered. 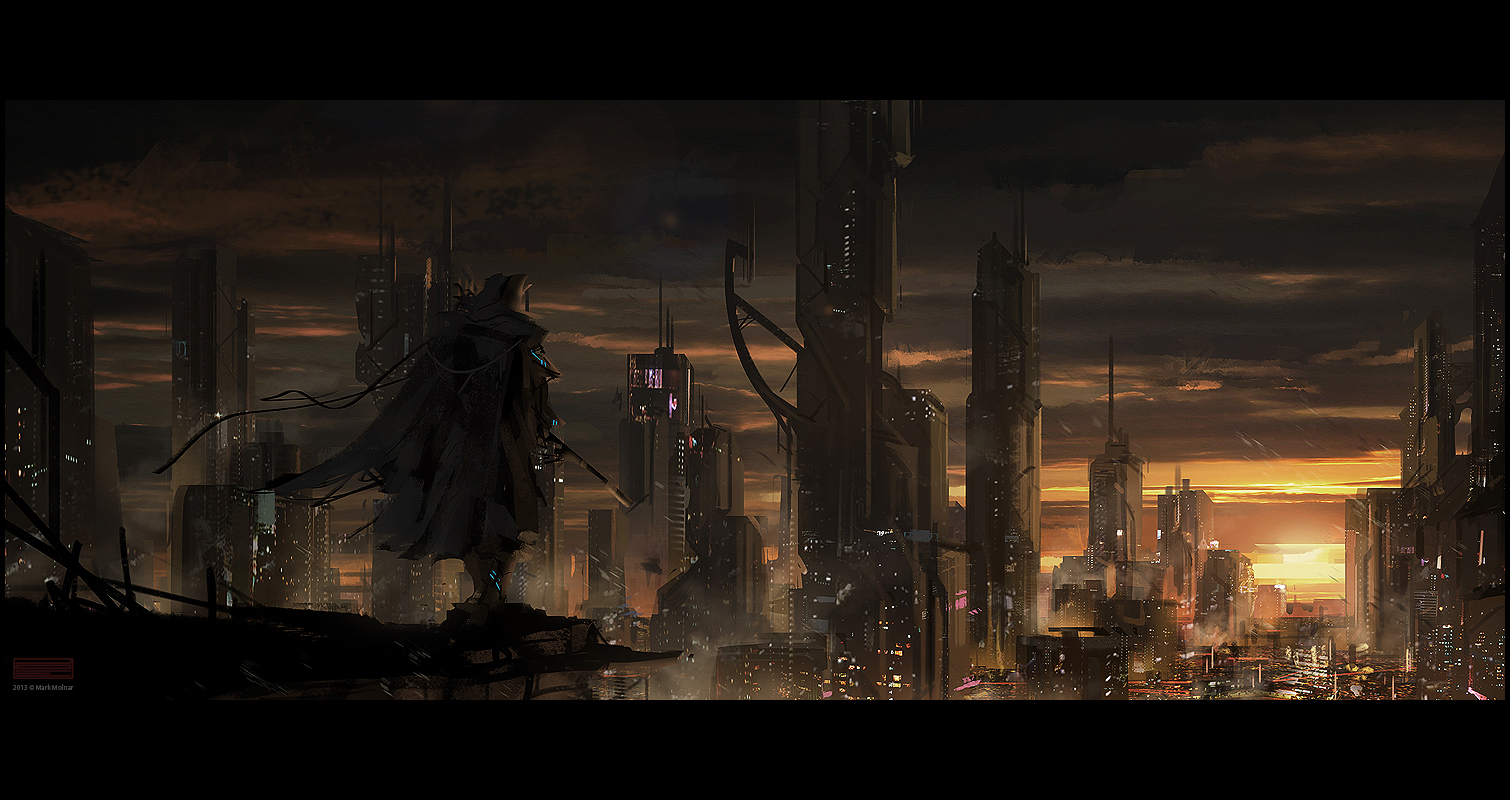 This is a particularly interesting one, and it isn't immediately apparent what draws my attention or makes it appeal to me. As always, the buildings are lit from below... They don't appear particularly "aged", though, and the coloration on them, while patchy (more patchy), is still bright and vibrant. I think what really makes this one feel aged is the fact that there are no streets to be seen. Except for that one in the foreground, but compared to the other pictures, this one city is the only one that really lacks highways. It feels overgrown with buildings, as if perhaps they were added onto and added onto to the point where they obscured the streets from above. There's also a certain chaotic feel to it, like nothing is clear-cut - like it's hard to tell where one building ends and the next begins. Closer to the ground, everything is a jumbled mess.

One last picture, and then I'm done. The bright lights in the city for this one are really awesome, as is the bloom effect around the windows, making it feel foggy in the rain. The buildings are, as usual, lit from below. I find it interesting that the street lights are off, and i somehow feel that it gives a different quality to the picture than would be there otherwise... I'm not entirely sure what that would be, though. Interestingly, while the sides of the buildings are lit, the streets themselves (on the left) are almost dark. That's a curious twist that I'll admit I rather like. And of course there's the rain - but that's something I've always loved anyway. 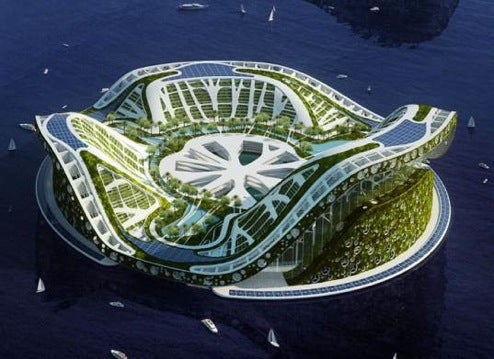 #40 by InfelixTurnus
Wow, that last one is a really cool look for some sort of self-sustaining supermodern building complex. I look at it and think that I would probably never have to leave, it would have everything I needed.

#41 by Katorone
Some of these remind me of the Venus Project.

Their proposal of a city in the sea.
Beware of he who would deny you access to information, for in his heart he dreams himself your master.

InfelixTurnus wrote:Wow, that last one is a really cool look for some sort of self-sustaining supermodern building complex. I look at it and think that I would probably never have to leave, it would have everything I needed.

It really appeals to me for some reason - I'd love to actually explore it myself.

Katorone wrote:Some of these remind me of the Venus Project.

Their proposal of a city in the sea.

Not for LT, though... I think it doesn't quite have that LT feel. (Just my opinion, of course, feel free to persuade me otherwise.

)
Have a question? Send me a PM! || I have a Patreon page up for REKT now! || People talking in IRC over the past two hours:

#43 by Katorone
No, you're right. I'd rather see these in real life as well.

Regardless, I'm sure Josh will blow us away with his creations.

Beware of he who would deny you access to information, for in his heart he dreams himself your master.

Katorone wrote:Some of these remind me of the Venus Project.

Their proposal of a city in the sea.