#1 by Talvieno
Take part in the discussion --> here
Only submissions in this thread, please.

Welcome to the sixth edition of the revived Limit Theory Fan Contest! This month will be about The Universe. It doesn't necessarily have to focus completely on the universe, but it must touch on the topic in some form. Be a little creative, and I'm sure you can come up with something awesome.

Everyone can make as many admissions as they like, but only one can be the "official" admission by which you are judged.


The objective: Create art about Limit Theory.
This could be in written form as a story, lore, or a detailed idea for a mod. It could be visual like a gif, photoshop or video. Or even audio - anyone up for a bit of stand-up about Limit Theory?
These are just a few ideas off the top of my head, but I'm sure you guys can think of a lot more. It is fine to use other games' assets in your submissions, as long as your work is your own.
Rule of thumb: "Does it spotlight Limit Theory?".


The rules: Note: if you're using another site to host content, make sure the title and comment displays that it's part of a contest submission.
This only to avoid future Googlers from becoming confused when looking for official content.


Judging:
Our jury of three people will judge the submissions based on the following criteria:
Have a question? Send me a PM! || I have a Patreon page up for REKT now! || People talking in IRC over the past two hours:

https://youtu.be/hSDzu09bbwk
There is no peace, only passion

#3 by CSE
So here's a rather cheap submission. Somehow, the topic did not really speak to me... 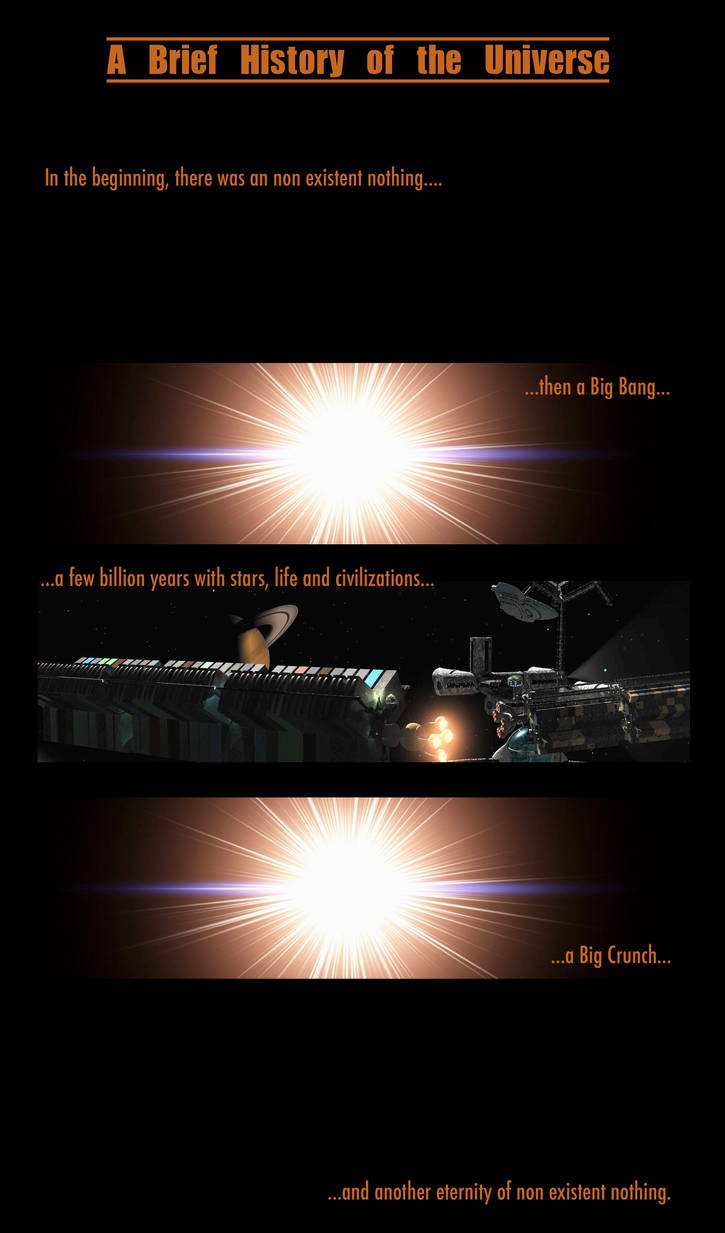 And (even if this time, there are not many more details to see), the larger version as well...

Some reference: obviously the title comes from the book of Steven Hawking (but the physic mistakes are mine

). The initial text comes from a song from Sash! (youtube link). The few models are made by yours truly.

#4 by Xephyr
Ive never actually submitted it into anything, just made it cause i was hyped for LT.

But my videos i made for LT, touch on the universe of LT(i think)? Idk, up to you guys. But if they count, i guess each video would be its own submission.

The LT universe represents a group of ideas; Ideas that when bound together form the basis of a living universe. A universe where anything is possible, where you can be anyone, own anything, and have the freedom to pursue your own goals and interests.

Through the years I have become inspired to write about game concepts that I find interesting and fun. Through my writings I have been able to create a vision for a game which I believe may come to light in the Limit Theory Universe. The below text is my version of what that vision may look like in Limit Theory.


The Economy
For the purposes of discussion the goods in the LT universe can be simplified into several major categories. Ore, which is used in construction of everything from stations to weapon blueprints. Fuel, which is used to power structures and ships. And finally crew, which control ships, post jobs, and make decisions based off of their experiences and environment.

For the economy of this universe to prosper, ore, fuel and crew need to be traded and produced. This means that in the beginning of a newly developing system the average life of a civilian is likely either that of a trader or that of a worker who is manufacturing a product.

Unfortunately not everyone wants an average life. Some will inevitably turn to piracy to get ahead of the average citizen. The life of a pirate is exciting and full of risk. In newly developing systems the pirate can roam free, stealing from the hard working miners and traders in order to gain substantial profits for very little effort. But soon the traders and miners will grow tired of loosing substantial portions of their profits. They will go to the local station or colony and place a reward for anyone who will damage and destroy the pirate threat. It isn't long before some of the traders decide to change their carrier to something that is both exciting and legal. They become the first privateers as they hunt down offending pirates and destroy them.

But not all pirates are destroyed. Some flee and set up safe havens in nearby systems. While others venture deep into the dense nebula to plot their next strike. The most notorious of these pirates have large bounties placed on their names, leading to the rise of bounty hunters.

While all of this is happening, new opportunities arise for the average citizen. The prices of goods rise and fall as pirate activity changes within the system. Some citizens place bets on which bounty hunter will take down the top crime lords, while still others will find ways to make a profit through reporting news of special events and happenings. The list of possible careers continues to expand as others look for profitable opportunities.

Groups of like minded individuals begin to form together. They create their own rules and goals which are dependent on the services they provide. With these organizations working together prices for goods begin to decrease and the citizens are able to afford a wider variety of commodities at a cheaper price. The organizations form under a faction.

Factions interact in much the same way as the organizations within them. They fight, trade, create alliances, declare wars, and most importantly do what is in their best interest. It is these ideas that form the living economy of the LT universe. It is up to the player to exploit this system to the best of their abilities in order to make a mark in the universe and possibly rise to power.


Manufacturing and Research
With the explanation of the inter-working of the economy in place, we are now ready to discuss manufacturing and research. As the economy continues to expand, the need to design and create advanced technologies becomes even more important. The free market which spurred job growth is also the same market which provides the commodities needed to maintain an empire.

I imagine that there will be stations dedicated to both research and production of items. Research stations take time to develop technologies and proceed through the procedural research tree. This technology is then sold to organizations within the faction. It's the responsibility of the organizations to produce assembly chips based off of the blueprint of the technology and then sell those assembly chips to production stations. Production stations produce the items in the quantity given (dependent on the number of assembly chips) and then hire traders to transport the chips to commercial areas for sale.

Organizations also have the option of keeping the end product if they pay for the materials used in the construction process, along with any labor costs.

#6 by Dinosawer
Time for submitting!

I did music again. This time, luckily, I had more time to put into it, so I'm quite happy with the result this time around.

Of course, the theme is a tad hard for music, but I think I managed. I tried to illustrate the evolution of a star system in music: start as a gas cloud, slow accretion, star forming and planets, life springing up and colonising the system, the system being torn apart by war, slowly rebuilding to its former glory, after which everything gets wiped out by a supernova.
Of course, you might not hear any of this in it, but hey, that's how music works, nothing I can do about that...

Anyway, here it is: Lifetime of a Universe.

Also, fun fact: the track is 3:14 long, and that really is a coincidence.

Will put it on Soundcloud later, but my internet is too bad atm to get anything uploaded there.
Edit: is now on soundcloud, includes download link
Warning: do not ask about physics unless you really want to know about physics.
The LT IRC / Alternate link || The REKT Wiki || PUDDING

#7 by IronDuke
Here's my entry, the result of a considerable amount of research into ancient Hebrew literature, Old English grammar, of headscratching, and of procrastination.

This being a history of the generation of the Universe of Limit Theory, as handed down by forum posts.

The spirit of Josh looked upon the Universe, and was dissatisfied. Limits yet existed, contradicting the Theory. Angered, Josh destroyed the Universe and redirected the algorithms within a new tongue. The new tongue directed the algorithms in a well-changeable manner. And allowed the Theory to be fulfilled. Not only by the spirit of Josh, but also the spirit of others.
Yet limits remained. The Engine itself was tainted. Therefore the spirit of Josh, looking upon the Engine and yet seeing limits, was stirred to remove them. But they were a part of the Engine. Therefore Josh dismantled the Engine, and breathed new life into it in another tongue. And this tongue also was spoken by the Procedural Generation, being of the Engine. And the algorithms therefore also spoke the new tongue, being of the Procedural Generation. The new Engine was truly without limits, according with the Theory.

#8 by HowSerendipitous
Heh, 19 minutes to go and I got it in!

Yeah, so it might've looked better animated, but ohowell....

#9 by Talvieno
And now, for the results of the July 2016 "Universe" competition!

The available prizes are the $30 voucher and Sol Trader.

The first place winner is: HowSerendipitous, for his entry Carl Sagan Quote Comic - with a score of 85.33!!

Prizes will be handled now in the comments thread! HowSerendipitous, you're first up with a choice between the $30 Steam/GOG voucher and Sol Trader!
9 posts
Locked