This devlog is absolutely packed with shinies!!! And since I know most of y'all want to get straight to the good stuff, here's the link:

Since I'm doing every other week, Josh added some pictures of what I was working on last week in his last devlog. BUT, he did not go into detail about how those shapes were made, so I'll talk a bit about it more today.

Keep in mind that I'm still in the basic stages of creating the pieces that will make up ships. These images don't represent whole ships and stations, but rather pieces that will go into their formation.

I've started writing tutorials to document everything that I'm learning about procedural geometry. I feel like there's a huge deficit in the game devlopment community about procedural & computational geometry, so I hope the blog helps people get started. They'll also be super interesting for those of you who want to know as much about the nitty-gritty of how LT is made. HOWEVER!!!! This is not Official LT work. I write them in my spare time, mostly for fun- don't interpret them as official documentation of LT code or official LT tutorials. They're written in general pseudocode that could be adapted for any language in any engine, and don't use real LT code. In addition, they do NOT replace the devlogs, but I will link them to augment the logs for those of you who want to learn about procedural geometry. OK! Now that we have that out of the way, here's the link: Lindsey Reid's graphics tutorials blog on Wordpress.

On to the devlog!!

The Shape object is our way of storing information about the meshes we generate. We (now) make no distinction between 'basic', low-poly Shapes like boxes and spheres and Shapes that are generated as combinations of other Shapes. This allows us to pass in a combination of Shapes to a combination-maker, allowing us to create complex Shapes like these rings made out of curvy tendrils. Here, the curvy tendrils are their own Shape that get passed into the Ring function.

Shapes store a list of verticies and a list of polygons. Polygons are arbitary-length list of indicies. Storing indicies grouped into polys instead of tris was Josh's idea and implementation, so thank you massively, Josh! We also now convert the Shape into an engine-level Mesh at the very LAST step of Station/ Ship creation before passing that Mesh onto the renderer. This was another piece of Josh's refactoring work that gives us a little performance boost.

After Josh did all of this refactoring for how Shapes work, I then refactored the shape-creation functions & Joint functions to use new Shape system. Josh and I have found that using n-length polys instead of only tris for shape creation better... describes shapes. This concept is hard to put into words, but if you think about it, many shapes like the dodecahedron with its pentagon faces, is better described with 5-index polygons than as triangles. Then, when we go to perform warping functions like extrusion on the Shape, the output looks much better if the polys of the shape are accurately represented in code AS the polys they are, instead of subdivided into tris.


Not much fancy to say here: I wrote an Icosahedron shape! w00t
Spoiler:      SHOW 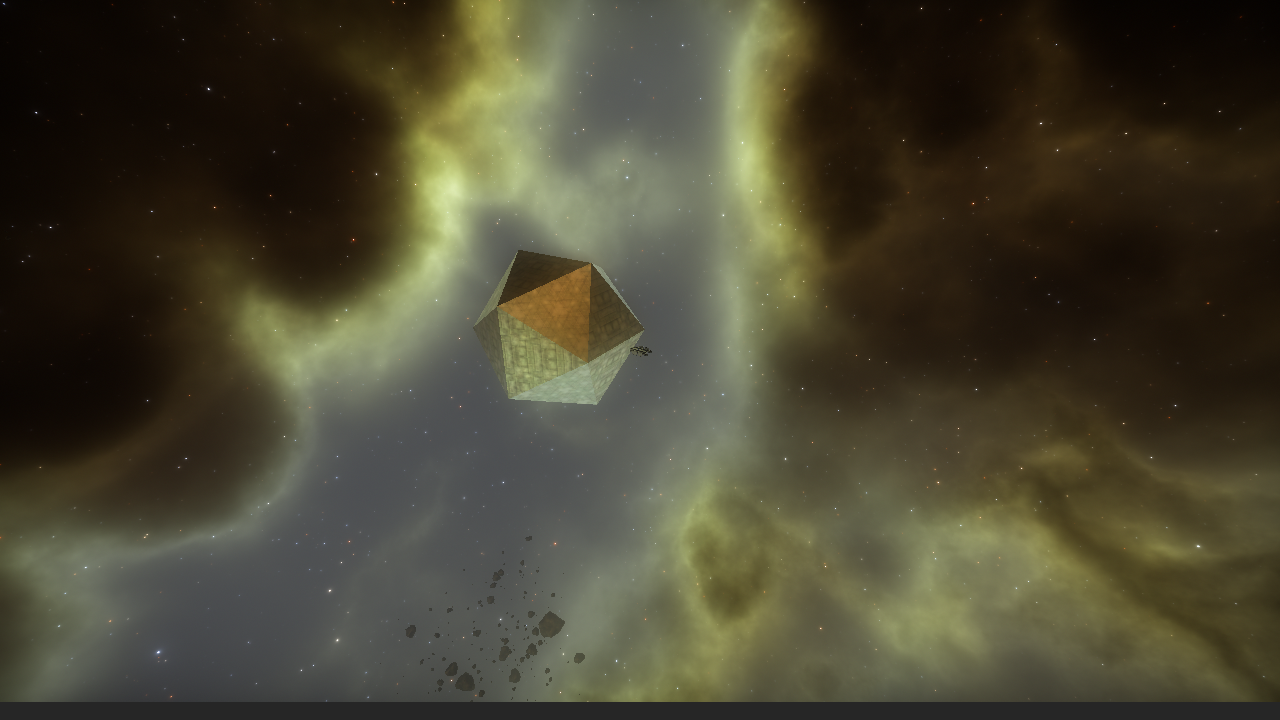 In addition, I added a gumdrop/mushroom shaped Torus function, and tweaked the Hypocycloid so that it can have an arbitrary number of points on its 'star' shape.
New Torus
Spoiler:      SHOW 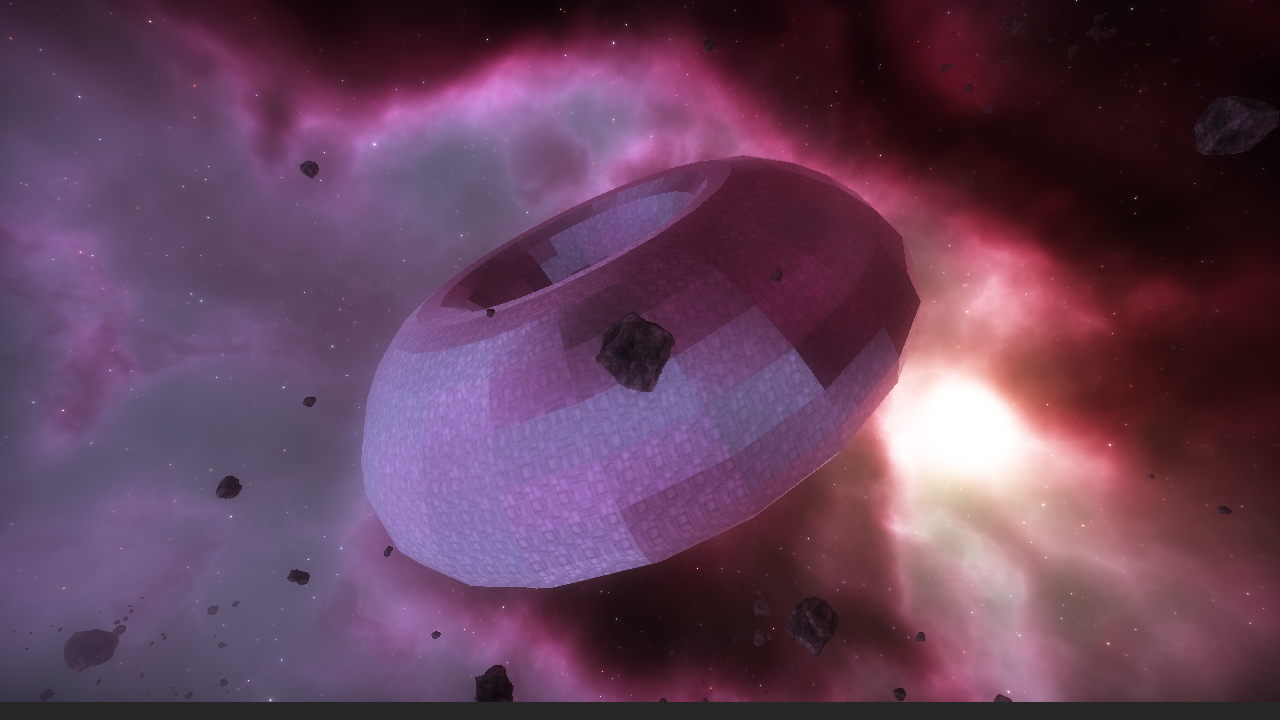 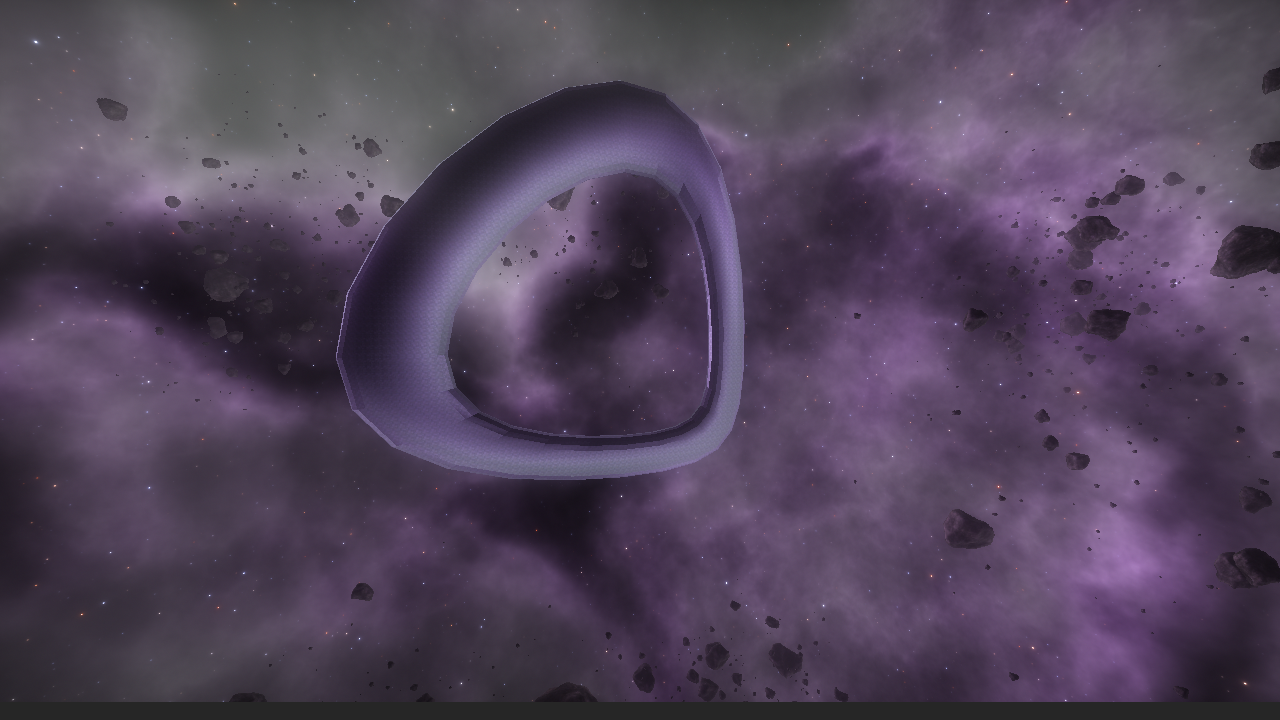 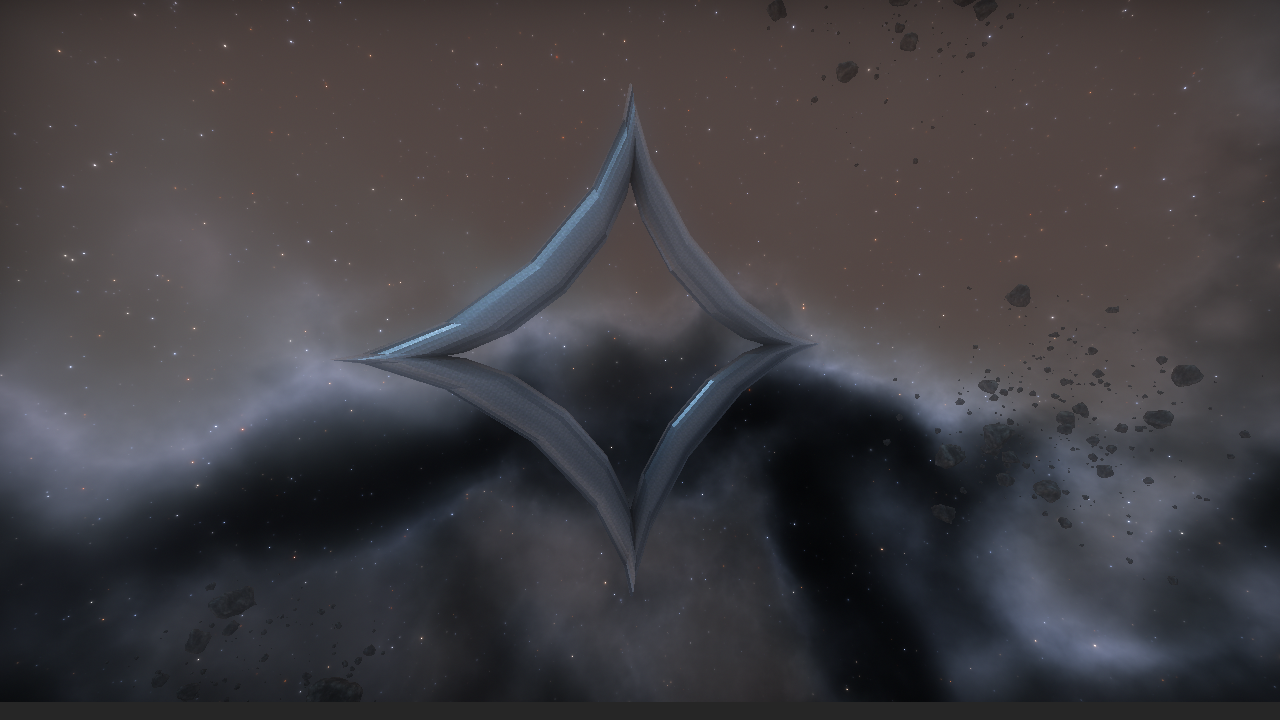 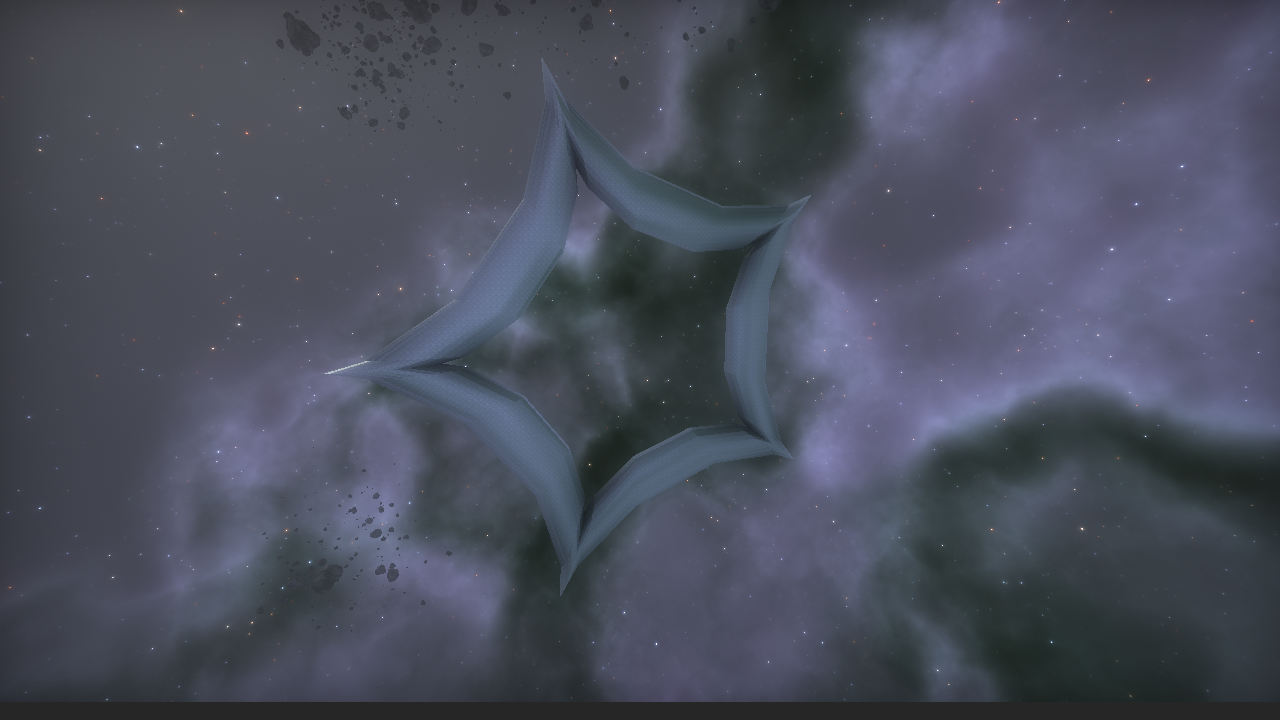 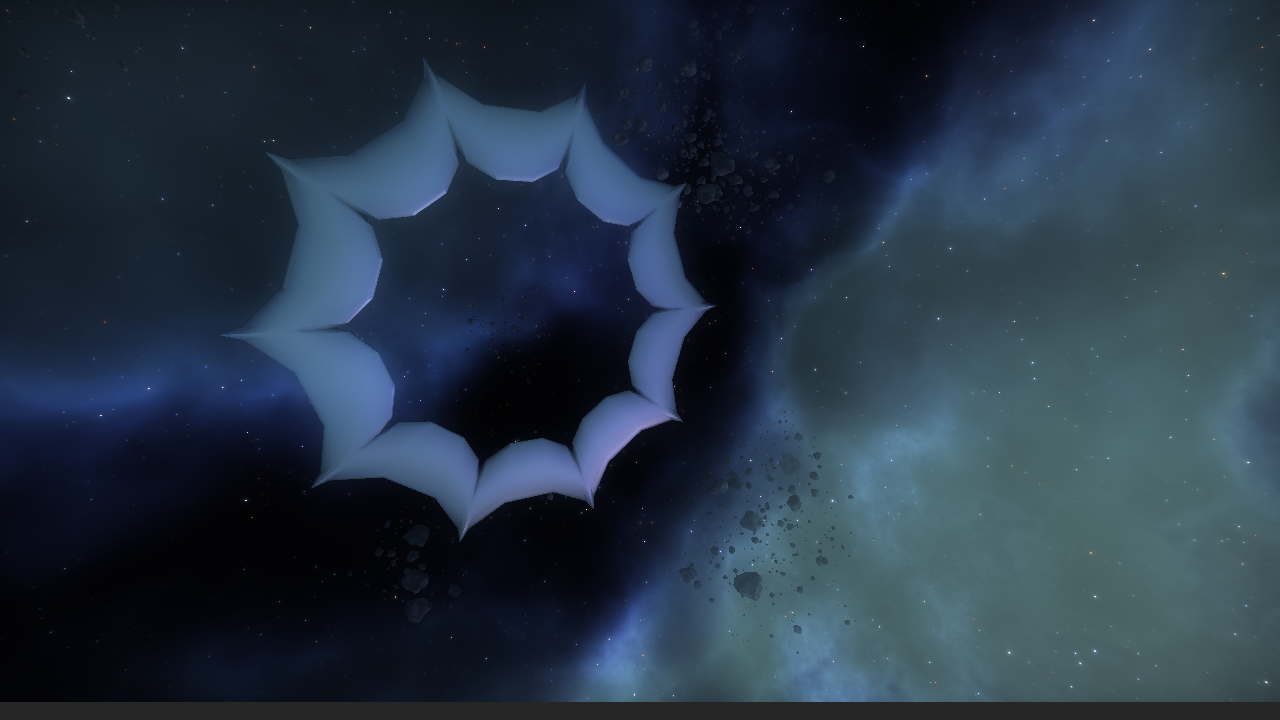 Lots of the pretties from the last devlog gallery are a result of applying the new Stellation, Extrusion, and warping functions to the Icosahedron and circular Torii. I wrote the Stellation & Extrusion functions and the shapes, and Josh added the fancy warps.

Here's a sequence of stellations & extrusions applied to an icosahedron.
Spoiler:      SHOW
The basic icosahedron from above. 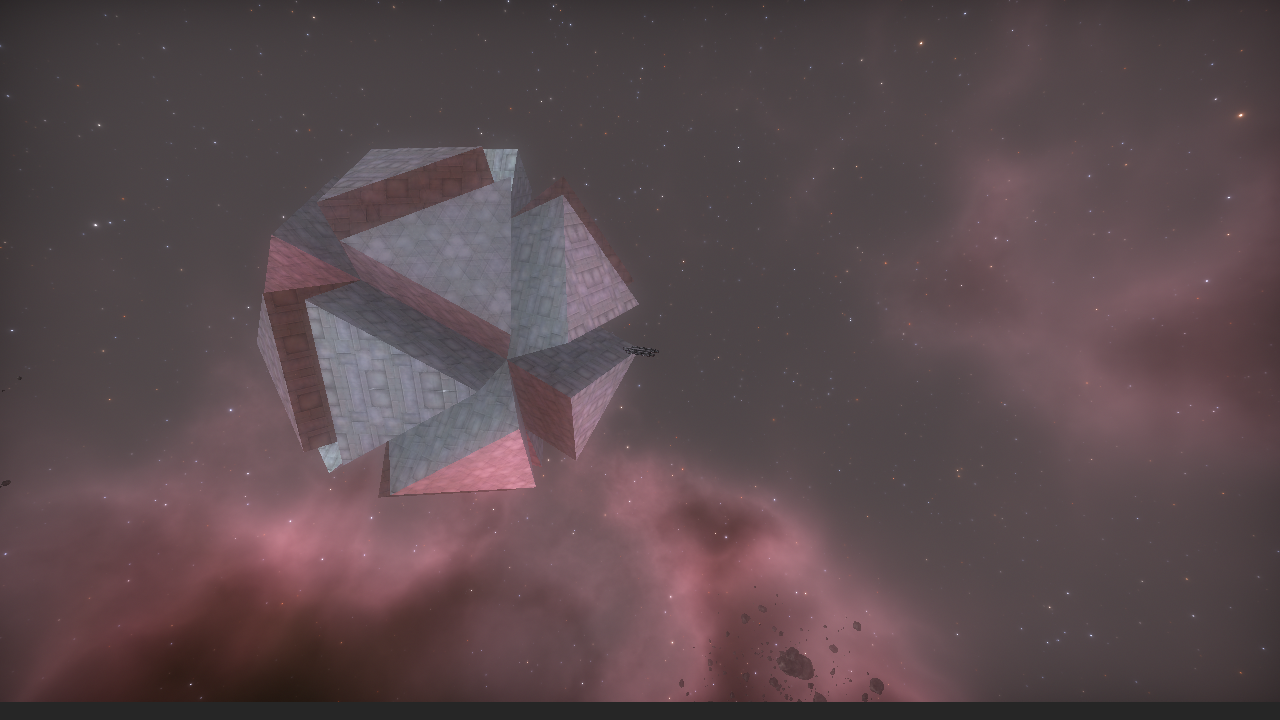 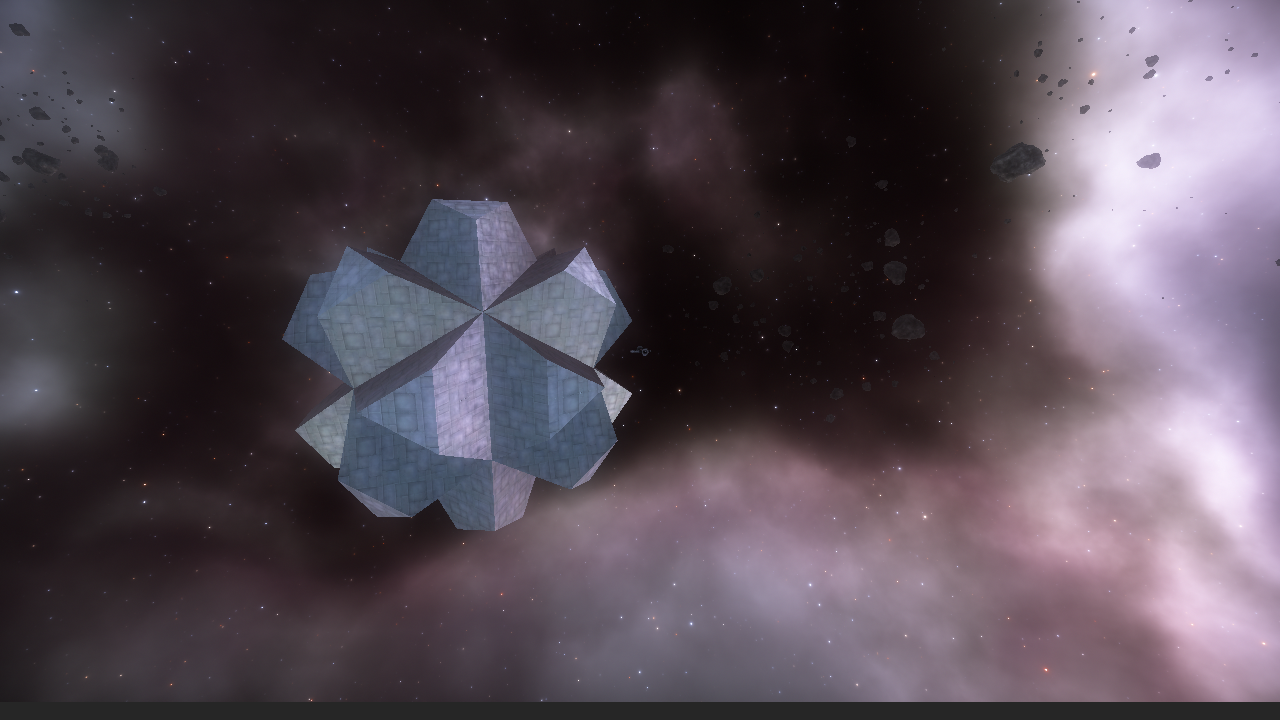 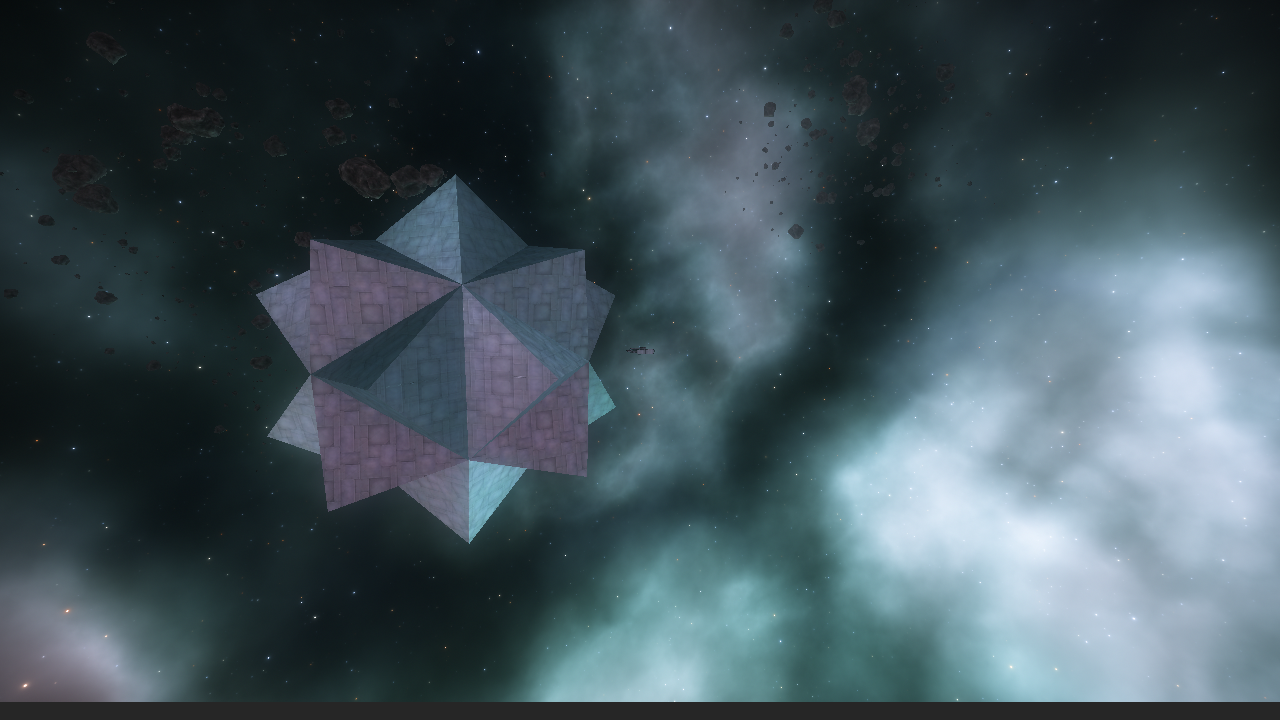 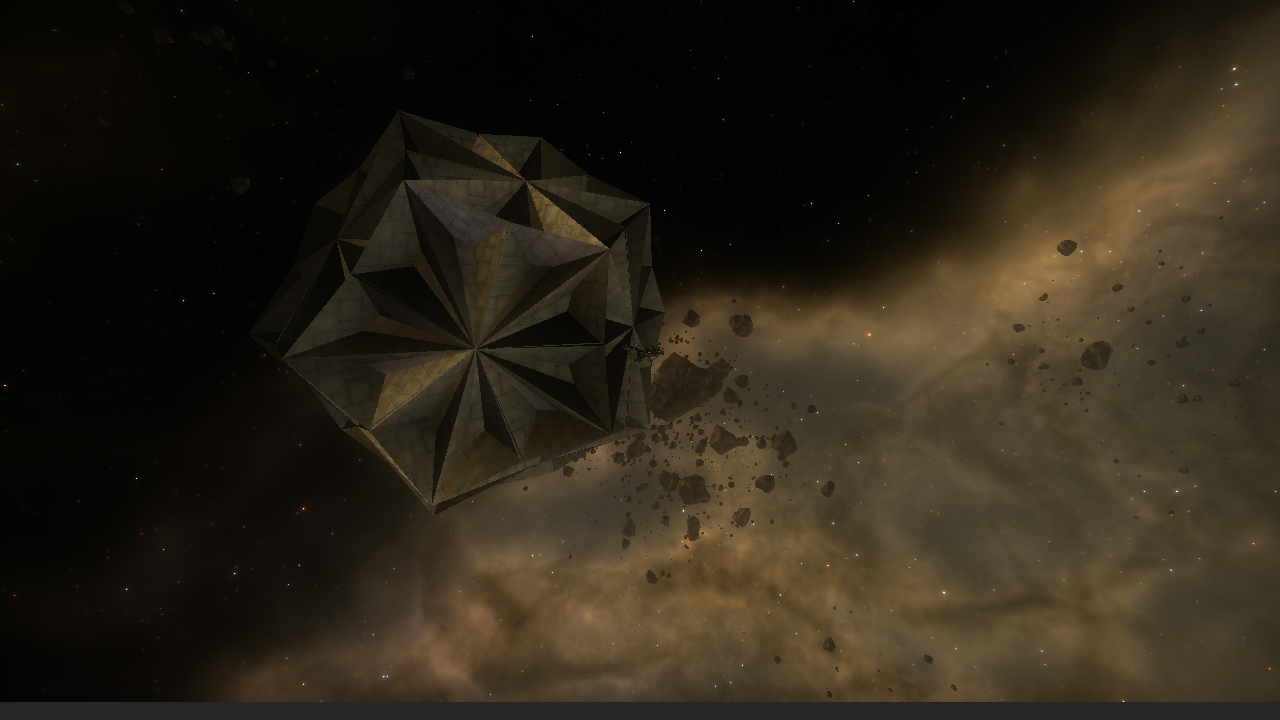 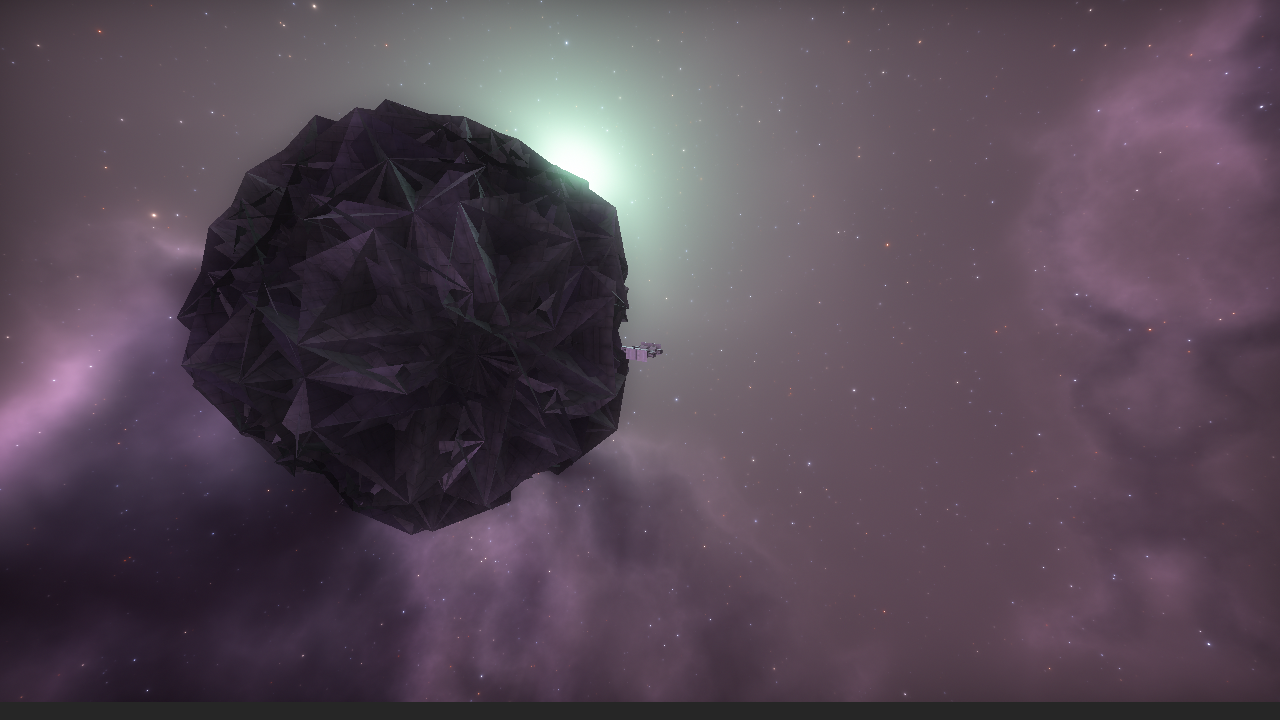 Here's an example of stellation applied to every face on a torus. Notice how the torus is now "pointy":
Spoiler:      SHOW 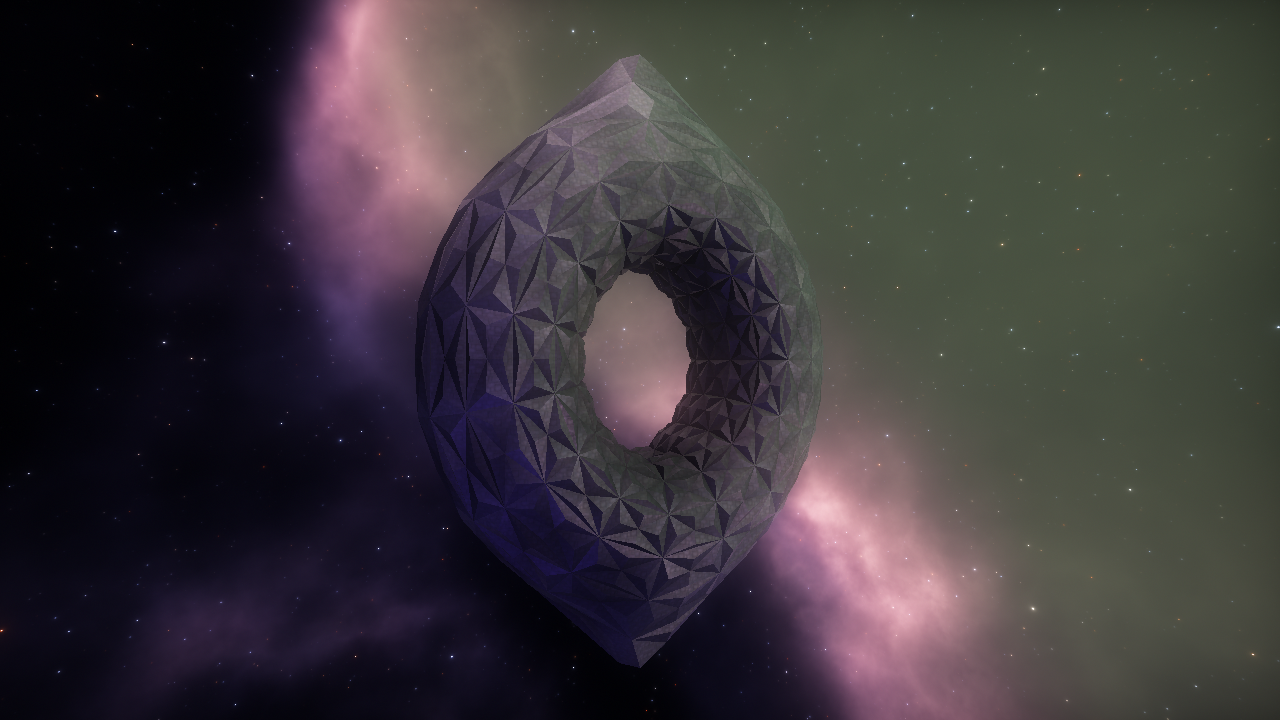 And here's an example of extrusion applied to a torus. Notice how the quads of the torus now "stick out", or "extrude", from the body:
Spoiler:      SHOW 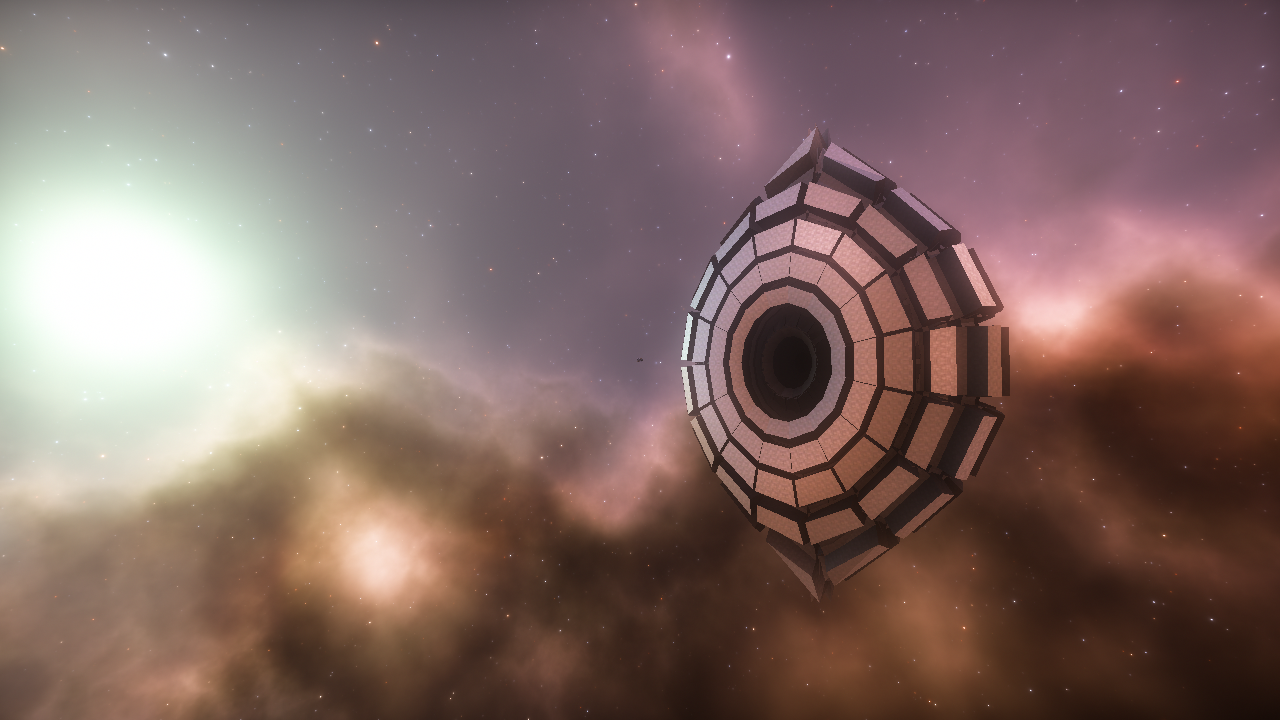 Those torii also have a combination of AxialPush, Sphereize, or ExponentialStretch warp applied to them. I'm going to explain these later because I'm running out of time to write this devlog, and Josh wrote these functions anyway OOPS.

Now that I've got quite a robust library of basic shapes, I'm beginning to experiment with how to join those shapes together into interesting looking groups. While writing all of these cluster functions, there are two important things I'm keeping in mind:
All of these patterns are built on the backbone of JointFields. Quite simply, a JointField is a list of Joints. Joints define a position and a direction, so that when you snap a shape onto a Joint, it is placed at that joint's position and is facing that joint's direction. The JointField object comes with functions that will help you generate them in lots of different patterns: lines, circles, curves, and lots of others yet to be written.

Joints can ALSO be generated from a Shape, with the joint's position placed in the center of each poly, facing the direction of the poly's surface (AKA the normal). This means that you can also snap Shapes to other Shapes! This has been possible since last devlog, but has been refactored to be able to work with any n-length poly instead of just tris & quads.

In addition, the cluster-generating functions have the ability to scale shapes based on their position in the cluster. Notice how some of the curvy clusters seem to taper off in size. This is just one example of ways I'll be able to randomize clusters so that we get extremely unique results every time. There is much else to be done in the way of customizing clusters so that they can combine to create a unique aesthetic for each civilization. This is only the beginning...

Here are a few clusters I worked on this week! Fancier examples can be found in the rest of the devlog gallery. 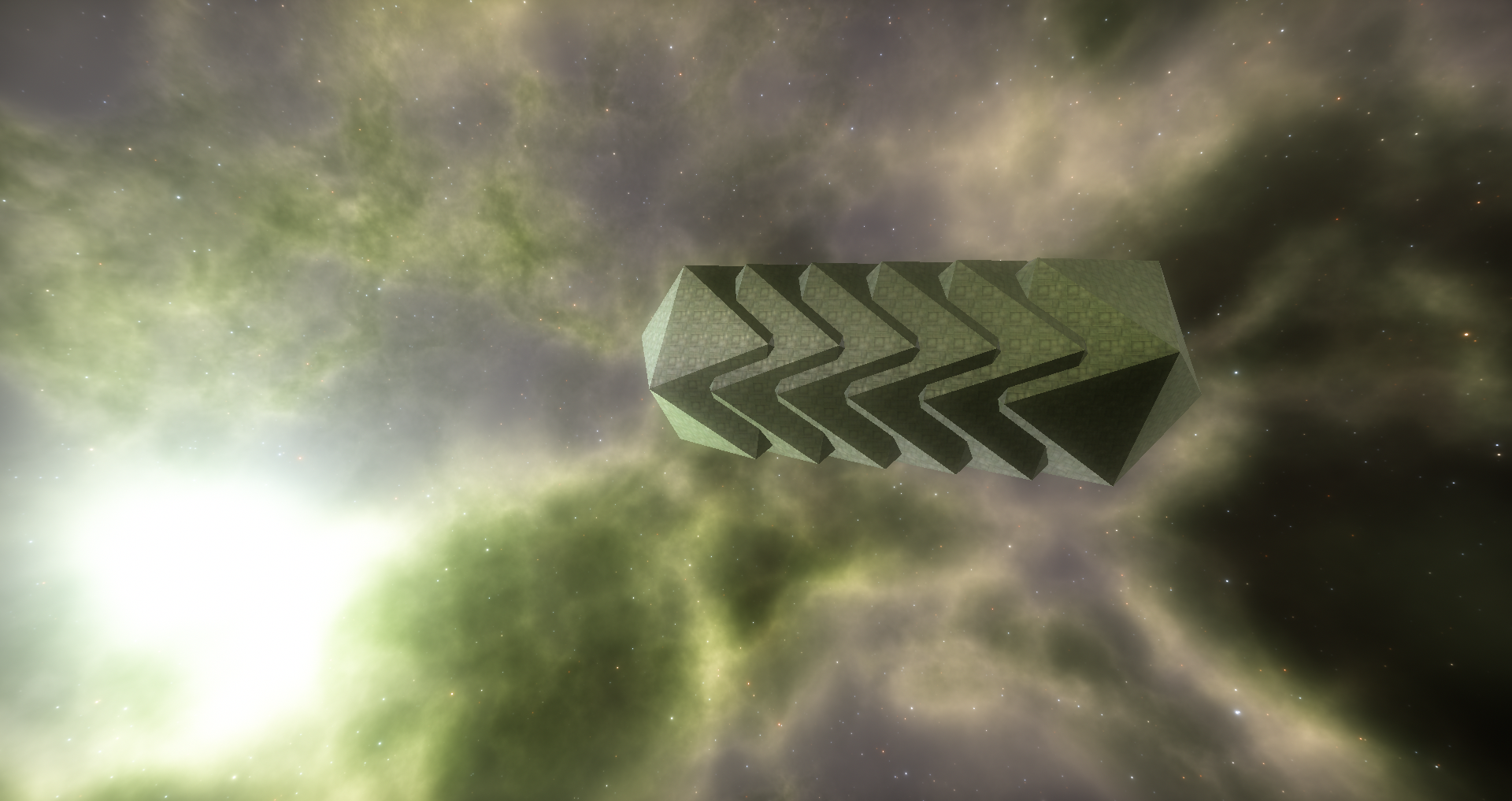 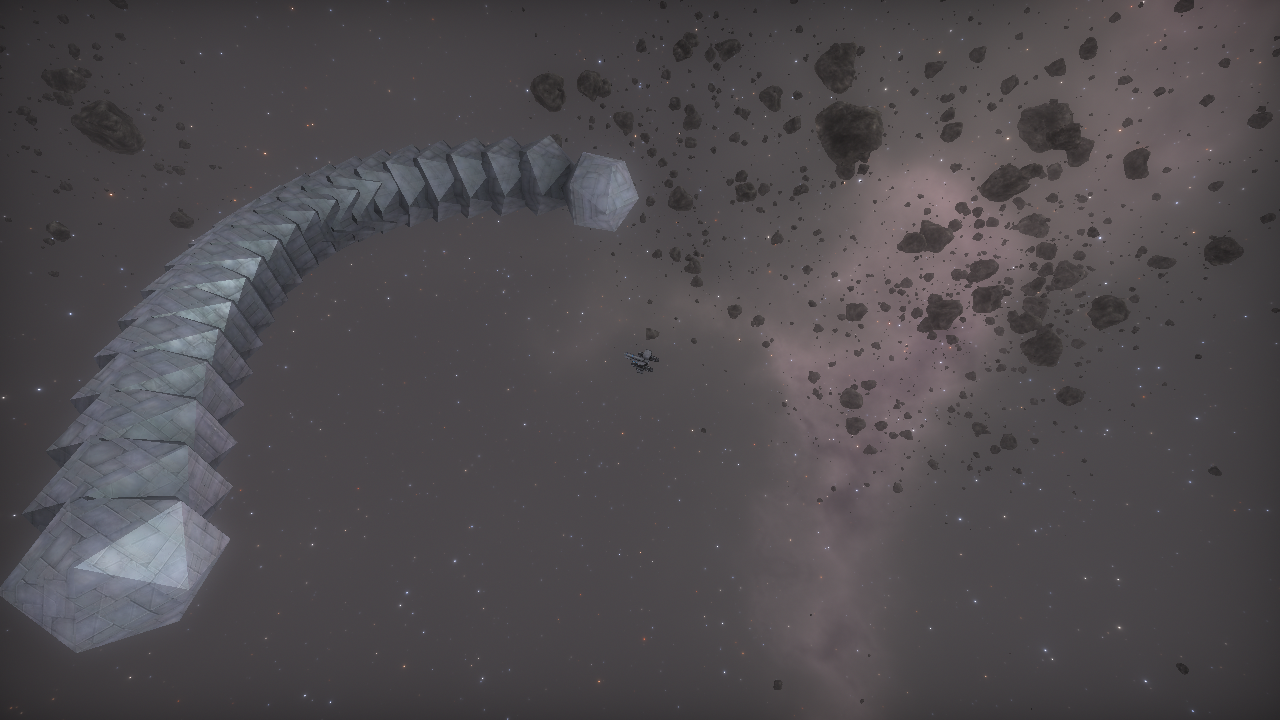 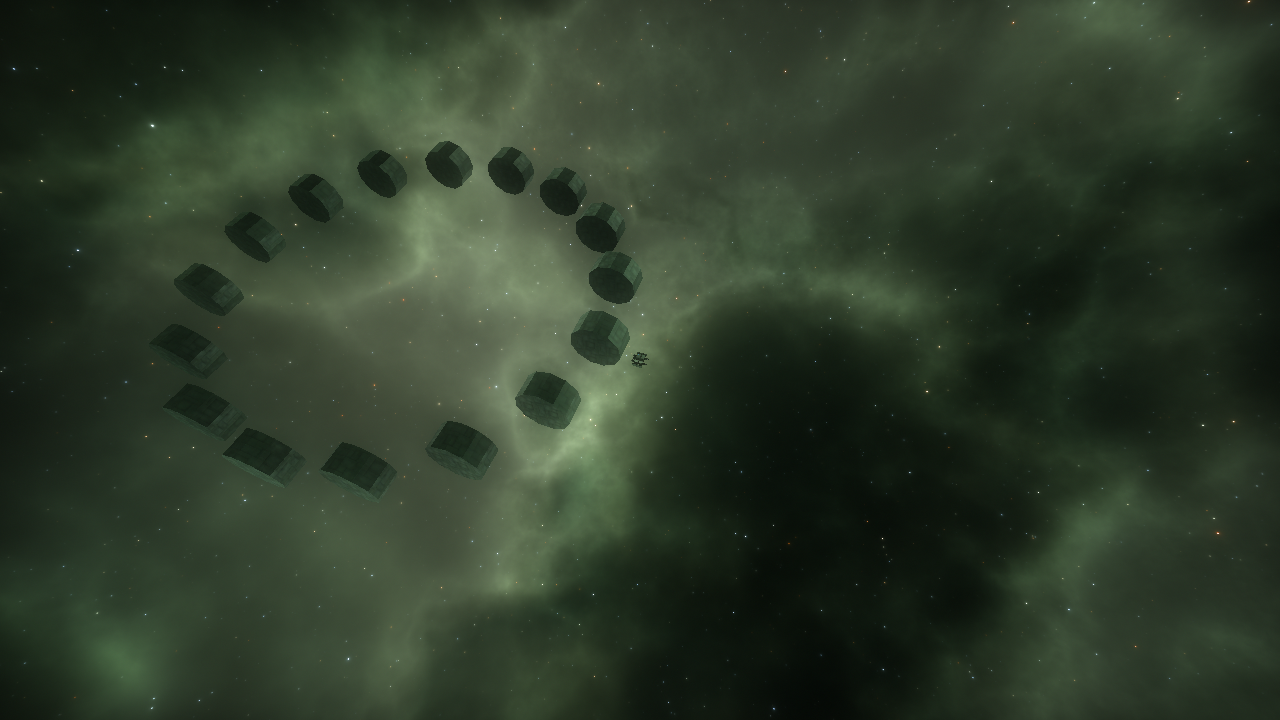 All facing the center. 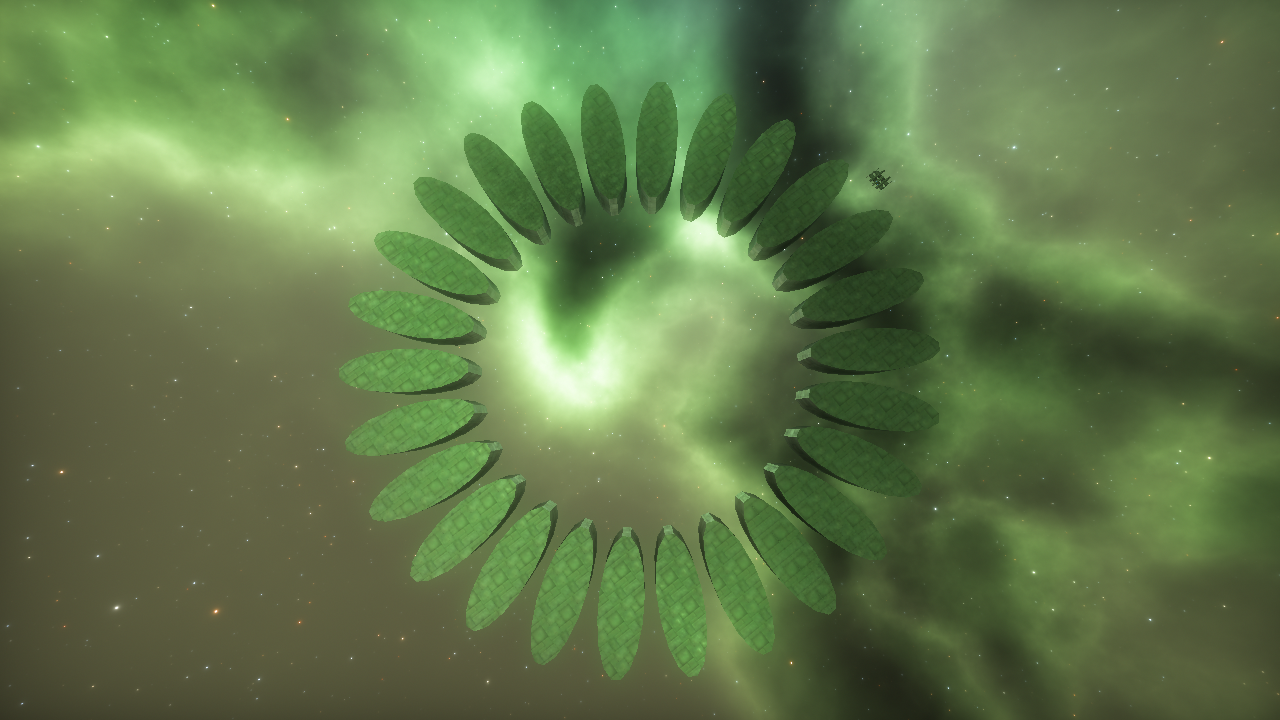 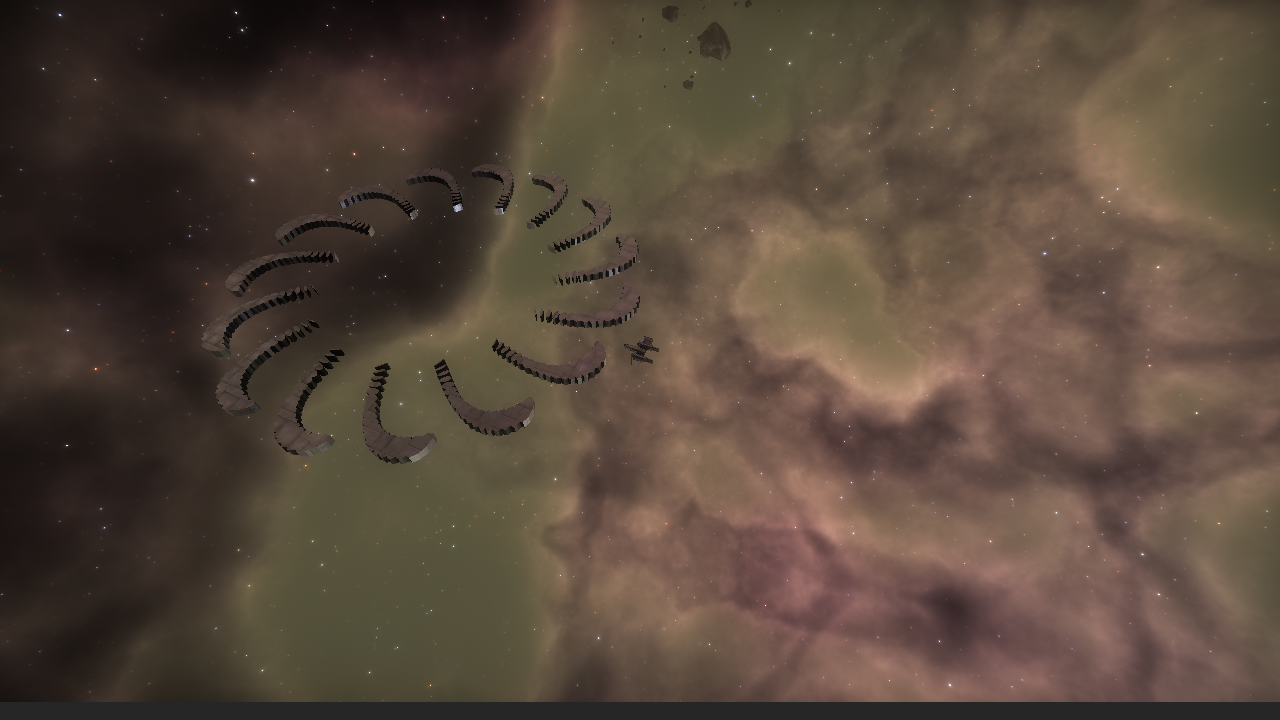 That's what I have to show for these last two weeks! Lots of good archiecture, and lots of fun new shapes and clusters. We're really starting to see how powerful it can be when two similar, yet unique brains combine: Josh's brain with his amazing math skills and practical computational geometry experience, and my brain with my artistic eye and creative coding ability. I can't wait to see what we come up with in the following weeks

As always, I'm up for comments & suggestions about what y'all want to see in the devlogs and how well I'm balancing technical details with simple pretties. Thank you for reading! <3

"You’ve got to work on something dangerous. You have to work on something that makes you uncertain. Something that makes you doubt yourself... because it stimulates you to do things you haven’t done before. The whole thing is if you know where you’re going, you’ve gone, as the poet says. And that’s death."
- Stephen Sondheim
Victor Tombs
Victor Tombs
Elder Council Member

I like that you take seriously the comments we make.The colour coordination with the backdrops is very artistic and the shapes are pleasing to the eye. I'm looking forward to the day I can point at the screen and say, "That's a space station!". I know it's still early days but I'm more confident in what you are achieving in this area of development than I ever was when Josh was trying to achieve something on his own.


LindseyReid wrote: ↑
Fri Nov 10, 2017 3:10 pm
We're really starting to see how powerful it can be when two similar, yet unique brains combine: Josh's brain with his amazing math skills and practical computational geometry experience, and my brain with my artistic eye and creative coding ability. I can't wait to see what we come up with in the following weeks

Your own words sum it up very nicely, Lindsey. Please don't fall out with each other. 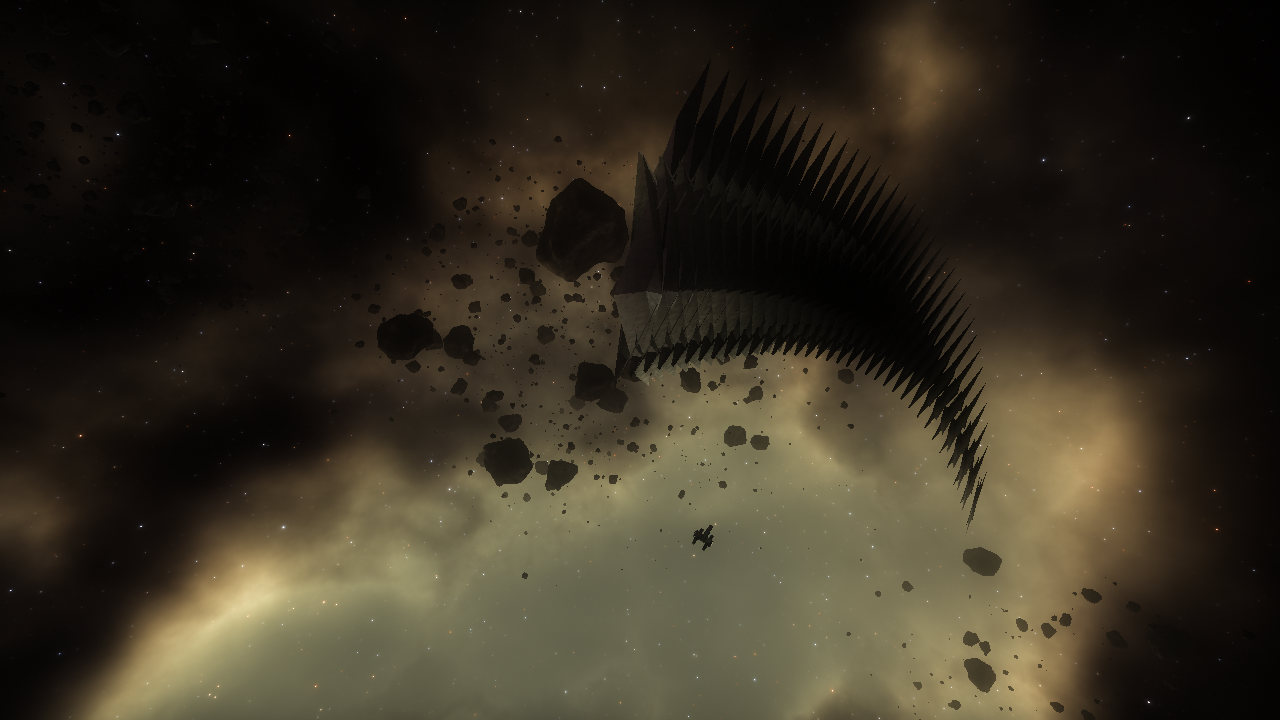 Something something spacewhales de-unconfirmed
Have a question? Send me a PM! || I have a Patreon page up for REKT now! || People talking in IRC over the past two hours:

That's all there really is to say. These will make for VASTLY more interesting shapes and designs than have been shown previously in this, or any other game.
So that's good.

#5 by HowSerendipitous
A circle cluster!

Thank you for the kind words. And I do indeed! Hyperion's suggestions inspired me to create the icosahedron. And the second y'all said 'these shapes are too dark' in the last devlog, Josh fixed the shaders to make the bright, readable shapes you see today.

I can't take every bit of advice, answer every question, or fulfill every request, but I do hear y'all, and I do take your comments seriously. <3
Ship Inspiration Pinterest!! (send me stuff)

LindseyReid wrote: ↑
Fri Nov 10, 2017 4:17 pm
I can't take every bit of advice, answer every question, or fulfill every request, but I do hear y'all, and I do take your comments seriously. <3

I'll answer all the questions I can, no worries.
Have a question? Send me a PM! || I have a Patreon page up for REKT now! || People talking in IRC over the past two hours:

LindseyReid wrote: ↑
Fri Nov 10, 2017 4:17 pm
I can't take every bit of advice, answer every question, or fulfill every request

Good grief, Lindsey! I'd hate you to do that. Take what you need and do your own thing with it. And thanks for informing us of how Josh is doing his bit in the process. I've always thought you'd work well together and was sad when you went away. It's looking better for LT with every passing day now.

PS Can you tell Adam I don't hate him. He does good work and obviously knows his stuff. I just prefer the less aggressive style of communication we see from you and Josh.

It's probably due to my age.

And no, you can't do everything Lindsey. I'm glad you're watching and listening. But eventually something needs to ship, and it'll never happen if you keep on making changes

You guys are doing great!
Shoot ALL the things!
S46
S46
Lieutenant

I really enjoyed this devlog, especially the gallery! Keep it up Lindsey :}
Devoted to providing LT with daily doses of eureka moments.

On an unrelated side note, how many levels of quote nesting can PHPBB take?
A life well lived only happens once.
Seems deep until you think about it.
S46
S46
Lieutenant

#13 by Miklos
After just your second post, I'm enjoying your devlogs more than Josh's, because it has more shineys and I get enough technobabble at work so I just enjoy seeing the pictures

But as Victor said, I can't wait to get to the point where I instinctively can say, oh that is spacestation, that is a fighter ship, that is a transport ship etc. even though it has been procedurally generated

#14 by jarl
Hi Lindsey, good to see some screenshots of your work, will you be doing procedural texturing as well as geometry? If so do you have ideas how this will work? I remember we had a fun discussion ages ago about how numbers from the procedurally generated faction/ai could determine things down to the colour of the weapon effects, lights and even the HUD of captured ships and it's interesting to see you mentioning this in the update.

Challenging your assumptions is good for your health, good for your business, and good for your future. Stay skeptical but never undervalue the importance of a new and unfamiliar perspective.
Imagination Fertilizer
Beauty may not save the world, but it's the only thing that can
51 posts
Post Reply