Grumblesaur wrote: ↑
Sat Oct 07, 2017 9:25 pm
If the scripting portion of the engine is multithreaded, and you assign a thread for every script, threads will be distributed by the operating system across as many cores as the engine is made aware of.

from the Lua reference manual

Lua supports coroutines, also called collaborative multithreading. A coroutine in Lua represents an independent thread of execution. Unlike threads in multithread systems, however, a coroutine only suspends its execution by explicitly calling a yield function.

Now that doesn't stop the game engine using O/S mutlithreading for, possibly as an example, graphics rendering and display.

Damocles wrote: ↑
Sat Oct 07, 2017 12:44 pm
Concerning this topic, whats the planned logic ticks per second for LT?
(For RTS games I have found 16 Ticks per second to be more than enough. For a Racing game or Shooter, it probably should be around 60 or even higher though.)

It's too early to tell at the moment.

Grumblesaur wrote: ↑
Sat Oct 07, 2017 9:25 pm
Such a model might make scripts that depend on other scripts impractical, since if script B requires data collected or generated by script A and script B's thread is given CPU time first, it might try to access empty or nonexistent data, or have to yield to A and try again later. We're at the mercy of the scheduler here.

What might be better is to execute scripts in order (and perhaps according to a system of priority, since some scripts will run at higher or lower levels of detail) and instead make multithreading available within the scripts so that operations that require logical or mathematical operations on large groups of entities can be farmed out to multiple threads for a quicker execution time.

Josh's current idea here is that scripts will read from the previous game state while building the current game state. That avoids most or all of the order dependence issues.

Damocles wrote: ↑
Sat Oct 07, 2017 12:44 pm
Concerning this topic, whats the planned logic ticks per second for LT?
(For RTS games I have found 16 Ticks per second to be more than enough. For a Racing game or Shooter, it probably should be around 60 or even higher though.)

It's too early to tell at the moment.

For a game like LT, I would expect it to be varied. Josh mentioned using a system where the AI would listen for events and arrange its updates with those in mind, to keep resources free and framerate as high as possible. Such a system would have very sparse updates in open expanses with few enemies around, more updates when doing a task such as searching for ore, and even more when in the middle of combat. While riding a warp rail, you only really need check on things whenever you get to your destination, but in a dogfight, you'd need to keep the AI "thinking" constantly. As such, I don't think your question is quite applicable here, Damocles.
Have a question? Send me a PM! || I have a Patreon page up for REKT now! || People talking in IRC over the past two hours:

#94 by Damocles
No, my question wasn't about how often an ai processes its own cycle. Its about the basic (fixed time) logic-tick in the gameloop.
The part that determines the timing.
The logic tick can be super cheap, if there are no updates scheduled to be calculated. No reason to make it delay dynamically (that would just complicate matters).

Its useful to have the same number of updates (ticks) per second, no matter how the render speed per frame is.
Having a fixed number of updates per second makes lots of calculations easier, and avoid edge cases in case the performance drops too low, or gets too high.
Last edited by Damocles on Mon Oct 09, 2017 9:48 am, edited 1 time in total.

I misunderstood.
Have a question? Send me a PM! || I have a Patreon page up for REKT now! || People talking in IRC over the past two hours:

#96 by Silverware
In the case of physics updates I would hope that Josh and Adam put that on a slider, so that we can adjust it for local performance.

For people like me whose machine has no issue running two games at 4K 60fps at the same time (only 60 thanks to screen refresh).
Then a physics update step rate of 60/s would be great.

For people like Talveino, who need a new laptop, you might want to set your physics updates down to 15/s.


With AI Updates, the base tick is likely to match up with the physics one, purely to allow any local AI ships to maneuver around in time with the physics updates, before a draw step.
The rest of the world might update far less often than this, and might even update less than once a second, if Josh decides to be smart and add in interpolation of the ships position when it doesn't have it's model loaded in the local system. (to make it look like it is flying smoothly) If he doesn't include that, then I'd expect AI in same system, but not loaded in would update every second to give the appearance of moving smoothish.

For AI outside the system, I would expect that the systems less than 3 hops away would update every 30 seconds or so, staggered out by a second each. And any systems further away than that to update once every 2-5 minutes.

This would mean that each AI tick should turn out to be close enough to the same length, as to minimize any perception of slow ticks.

Although the exact numbers for anything outside of the loaded in area would be up for debate, and likely controlled by fancy math.

#98 by Talvieno
A menu with a slider

Spoiler:      SHOW
or, rather, a very lengthy scroll bar in this case.

Three Sliders to rule them all!
Two Sliders to find the third!
One Slider to select the them all!
And in the sliders set them!
°˖✧◝(ಠ‸ಠ)◜✧˖°
WebGL Spaceships and Trails

#100 by Flatfingers
Can we have a slider that determines the number of sliders offered? 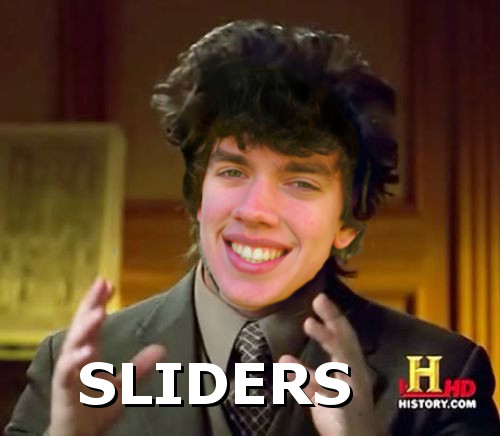 FTFY
Warning: do not ask about physics unless you really want to know about physics.
The LT IRC / Alternate link || The REKT Wiki || PUDDING

#103 by AdamByrd
I think we have enough wall space to have this framed and hung.

Now I want to find a pic of the office and photoshop it on the wall. In a nice frame.
Have a question? Send me a PM! || I have a Patreon page up for REKT now! || People talking in IRC over the past two hours:

Well this is now my favorite thing.
Shoot ALL the things!
Page 7 of 8
107 posts
Post Reply