Flatfingers wrote: ↑
Tue Sep 05, 2017 7:24 pm
Saaaayyyy... is there a thread anywhere (maybe stickied) that has links to each of the Development videos that Josh posted to YouTube, along with maybe a brief description of that video's highlights?

No, but that's a good idea and I should put one together.

Actually, no, that's an excellent idea.


January 2013: LT Dev Update #1
Josh talks about nebula generation, ship shaders, shields, and the RTS interface, as well as showing collision detection and handling. Lots of talk about asteroids in this one.
Spoiler:      SHOW

March 2013: LT Dev Update #3
Josh shows the inside of a hangar base, including the new market system, where he demonstrates buying and selling parts and ships. He takes a few missions from the new missions system, shows off the weapons and subsystems HUD, and we see two large-scale dogfights.
Spoiler:      SHOW

April 2013: Prototype tutorial
Josh gives a tutorial for the LT prototype and shows off what you can do.
Spoiler:      SHOW

June 2013: LT Dev Update #6
Josh shows off the greatly upgraded ship textures, HDR bloom and other lighting effects such as dust clouds and god rays. He also shows off the upgraded ship viewer interface, which he uses to create and launch guided missiles.
Spoiler:      SHOW

July 2013: LT Dev Update #7
Josh shows us non-seamless planetary landings, including terrain, water, and atmospheric scattering. He then talks for the rest of the video about his plans for AI and universe generation.
Spoiler:      SHOW

August 2013: LT Dev Update #8
Josh shows the upgraded asteroid fields: bigger fields and bigger asteroids. He also shows a WIP station model, lets us listen to some of Francois Jolin's music, and talks more about his plans for the future of AI in Limit Theory.
Spoiler:      SHOW

October 2013: LT Dev Update #10
The focus of this month was procedural research demonstrations, procedural tech trees, and the node-based data editor. Also mentioned are the new double precision engine, huge planets, the ability to mod (to some lesser extent), and the fact that Josh is not interested in ever changing warp lane functionality.
Spoiler:      SHOW

November 2013: LT Dev Update #11
Josh mentions he made some major changes to the AI, but mostly focuses on the node-based UI this time. Almost all UI has been transferred to the node-based system. He shows the new 3d ship interface and 3d universe map.
Spoiler:      SHOW

March 2014: LT Dev Update #15
Josh demonstrates the free market in LT, in a system with over a hundred NPCs. He also talks about the boss/employee AI split, and shows us the trade interface.
Spoiler:      SHOW

April 2014: LT Dev Update #16
Josh shows us a living system with real piracy, mining corporations, and small-scale combat between factions. He also shows us the project system, buying and selling goods, and the upgraded commodity interface. Finally, he mentions that he upgraded the graphics in almost all areas.
Spoiler:      SHOW

May 2014: LT Dev Update #17
Josh explains and demonstrates the new research mechanics, including blueprints and assembly chips, and also shows off planetary rings and the upgraded nebula algorithms. Toward the end, he talks more about the improved and expanded mission mechanics, as well as data as a tradable commodity.
Spoiler:      SHOW

June 2014: LT Dev Update #18
Josh talks a lot about the new "zone tech" - dynamic content-generating regions. He also briefly discusses planetary colonies and demonstrates that you can land on them, and finishes the video by talking about moddability and the precursor to LTSL while consistently losing dogfights.
Spoiler:      SHOW

July 2014: LT Dev Update #19
Most of the video is about LTSL and modding. Josh does some real-time dev work on procedural icons using LTSL, showing how you can change things within the game while it's still running. He also shows a few changes to ship design and the interface.
Spoiler:      SHOW

September 2014: LT Dev Update #20
Josh shows us changes in a number of areas. First, we see a lot of UI and HUD changes. He talks about the scanner more, shows us a wormhole close up, and then talks some about graphics, including the updated nebula algorithms, improved bloom, and lighting tech. He goes on to talk about colonies, cultures, the birth of NPCs and cultural traits, and finishes off with talking about LTSL and showing us lots of live coding, as well as demonstrating his testbed tech.
Spoiler:      SHOW

December 2014: LT Dev Update #21
Josh starts off by giving us a few minutes of relaxing HUD-less shinies. He then goes on to introduce warp nodes and warp rails, planetary rings, and an improved system map, all in a system with a lot of AI activity. After this, he shows us the new market interface, and a number of testbeds he's been using.
Spoiler:      SHOW
Last edited by Talvieno on Thu Sep 07, 2017 11:44 pm, edited 1 time in total.

#2 by Flatfingers
Hurrah! This is excellent.

The only thing I might wish is that these were organized using the "Spoiler" tag so that it's quick and easy to navigate between the different videos.

But that's being picky; the main thing is that Here They All Are!

#3 by Talvieno
Edited and fixed.

edit: I actually find it harder to use that way, because I use the thumbnails to navigate.
Have a question? Send me a PM! || I have a Patreon page up for REKT now! || People talking in IRC over the past two hours:

#4 by Flatfingers
This is outstanding -- thank you so much!

On navigation: I'm more text-oriented than visuals-oriented; it's also tough to get an overview understanding of a video just from one frame.

That said, I certainly wouldn't want to suggest that my preferred way of quickly grokking something is the only way. Are there any other ways these videos could be represented visually that don't require a lot of scrolling?

For example (and I have no idea of the feasibility of this; I'm just spitballing here), what if YouTube links could be displayed in a table-like grid? Then you'd only have six rows of thumbnails (five rows of four and one row of one thumbnail) to scroll through instead of 21 -- one frame from each of them in a nice, densely-packed view. That assumes a [table][/table] option, and that YouTube links can be rendered in them as thumbnails.

If those conditions were true, would that kind of navigation work better for you (and maybe others)?

#5 by Talvieno
That would be excellent... but I'd need to figure out how to make tables in bbcode.

It may be possible, using appropriate tags... and a good deal of code... I'll have to think about it.
Have a question? Send me a PM! || I have a Patreon page up for REKT now! || People talking in IRC over the past two hours:

Certainly feels strange watching these "blasts from the past" now.

Perhaps it's time for a 2017 video?
My Signature

#7 by Hyperion
Nice to have these all in one place. Maybe ought to sticky it

Certainly feels strange watching these "blasts from the past" now.

I think our next dose of Josh's soothing voice will be the announcement of beta. So basically 2020

That far in the future? Dang, I dunno if I'll survive that long! I might have gray hairs poking out my scalp by that time...

#9 by Hyperion
Well Det, I hereby declare that if by September 8, 2018, Josh has not given us a video, I will fly down to Louisiana and give him an ass whooping, because giving teenagers grey hairs is just rudeness.

#10 by BFett
If LT isn't out by September 8th, 2018 I may just head on down there myself and have a visit with the great node as well.

#11 by Detritus
INCITE THE MOB.

#12 by IronDuke
Way to make him comfortable with his progress. 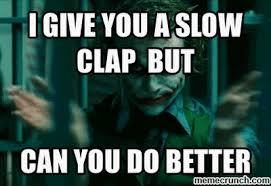 How about we hope for the beta by that date..

Given the history, full release before that point is very unlikely. 2019-2020 is realistic at this point I would guess.
My Signature

How about we hope for the beta by that date..

Given the history, full release before that point is very unlikely. 2019-2020 is realistic at this point I would guess.

I would guess that speculating on the release date is as much an effort in colonic extraction as it's always been.

I'm not gonna speculate on the date. I'm just gonna make good on my threat promise to give wonderboy an asswhooping if we dont hear his soothing voice in the next 365 days. Though I strongly think we won't hear it again until the beta announcement, so I suppose I'm implying I think it's gonna be less than a year

Challenging your assumptions is good for your health, good for your business, and good for your future. Stay skeptical but never undervalue the importance of a new and unfamiliar perspective.
Imagination Fertilizer
Beauty may not save the world, but it's the only thing that can
Victor Tombs
Victor Tombs
Elder Council Member

#15 by Victor Tombs
Trying not to sound like a broken record but I would very much like to see a video containing images of good looking, well-designed space hardware. To see awesome looking space stations looming out of the darkness would give me immense pleasure. To see beautiful ships in motion cruising through that gorgeous backdrop of LT space accompanied by the much-loved voice of Josh Parnell enthusiastically introducing us to his creations has become a bit of a daydream for me of late. And fleets of those giant ships of war that were talked of in earlier days....perhaps I dream too much.