#1 by Talvieno
And now for something completely different! I present to you SCAMPS' treatise on hiltorel: their history, physiology, and culture. This data is available on your character's PDA, which each one of you is carrying around. You can choose to have your character read it, or not, or simply say your character already knew most of the stuff here. You could even make your character believe the below myths (and more!). Whatever you do is up to you.

I was originally going to drop it on you during the mission briefing, but some people have suggested they'd like to be able to go into the briefing with some knowledge of hiltorel. So, without further ado...


SCAMPS here. If you're reading this article, it means two things: first, you're interested in the hiltorel, and second (more importantly), you got your PDA working. This implies you're smarter than a four year old. That's disappointing. I had my engineers crafting pound-a-peg toys to keep you occupied, but it seems I'll need to cancel that order and move you up to dolls.

Normally I wouldn't bother telling you jack shit about something you should've learned in primary school, but apparently the guys up-top have somehow gotten it into their heads that history might not be the same after you've been asleep several decades, the incompetent dipshits that they are. No disrespect intended, of course. If I'd intended disrespect, I would've pointed out that your whole species is so pathetic and insecure about yourselves that you ban cloning because you're afraid that 1. you won't get to wave your sexual organs around anymore, and 2. your clones will be better people than you are. Both are probably correct, but we're here to talk about hiltorel, so let's put aside our petty insults for now, shall we? It's not like you'd get them anyway.


HILTOREL: THE ENLIGHTENING
The hiltorel are our enemies. They have been for over eight hundred years, starting way back in 2307. They were the first aliens we made contact with and befriended (in the year 2135), but we've loathed each other almost ever since then. They called themselves the "peacemakers" of the galaxy, and yet, they attacked Earth with a huge interstellar fleet, putting us under their direct rule for 200 years "for our protection". During this time, they eradicated the former religions of Kristinity and Eslom. Naturally, when we managed to overthrow them, we gave them what they deserved and nuked their homeworld into dust. The squids will try to call themselves lovers of peace, and they'll preach about harmony and understanding, but when it comes down to it, they just want to destroy anything to do with violence, going as far as to imprison and brainwash anyone that disobeys. Even if that means they have to go to war to make it happen. This is not a stereotype. This is their culture. Their entire culture is focused around being hypocritical assholes. Humans actually look good by comparison.

You may have noticed that I referred to them as "squids". That's not too far off what they are, physiologically speaking. They have a spine, yes, and eyes, a mouth, lungs, and torso, but here the similarities end. They have four weak arms - two long ones for manipulating things, and two smaller, stubbier ones for holding and carrying, mostly because they never figured out pockets. Actually, they didn't figure out clothes at all. At most, they'll throw on a low-backed shirt around humans "for their comfort", like covering their nippleless chest is going to magically make us forget the masses of tentacles writhing about like Cthulhu's date on prom night. You've seen enough hentai to know where this is going.

All hiltorel stand on six tentacles and use them like legs, as though they were some kind of bizarre cross between a spider and an octopus, like FSM cut bits of animals out of a magazine at random and pasted them together. "Look what I made, mom!" As if that wasn't enough, they have a disorganized mess of tentacles on their their head and neck. For some, these growths extend all the way to the lower back. Unsurprisingly, hiltorel have always been featured heavily in pornography, which is probably the only reason most of you thirsty fukcers even know they exist. "Oh, I know what those are! I saw them in my favorite movie!" No you didn't, dipshit, those were all computer generated. With that in mind, let's bust some common hiltorel myths.

Hiltorel developed on a world with half earth gravity, a thick atmosphere, and loads of water. Their tentacles are incapable of supporting their weight under 1G without gravity assists. All those supervillain movies you loved as a kid? CGI, dumbass. For those of you that did know they were CGI, you're probably one of the morons that cite, as proof, that hiltorel airdrown. This is also false. They have gills and can breathe underwater, but their gills never develop past early childhood, so they prefer not to. And while we're on the subject of water - hiltorel do not shrivel up and die if they're placed in a dry environment. They are delicate, needy bastards - more so than you (shocker, I know) - but they're surprisingly resilient. Drying them out just makes their skin itch a little. Their tentacles function just fine without water, don't have natural lubricant, and don't have suckers. Anywhere. They're covered with a rubber-like skin, and good at grabbing hold of things. If you had a brain, you'd realize that if their tentacles were moist, slippery, and well-lubricated, they wouldn't be able to stand up on smooth floors.

So now we move on to the more ridiculous myths. First up, let's destroy the rest of your favorite movie: Hiltorel suck as sexual partners for humans. Their insides can't take much abuse, their tentacles are too flexible and weak to serve as anything besides tentacles, and they don't give birth to live young. They lay eggs, which are fertilized by the males. These also do not make good toys. And no, they don't lay an egg a day. Whoever invented that idea was an asshole, probably making a joke and thinking nobody would believe it. Guess what: everybody did. Let's get this straight: They are not chickens, and they don't lay eggs regularly. Do human women plop a baby out of their crotch every morning? Did any of you idiots even go to school? Do I need to teach you what school is?

And now, our best gems, brought to you by people with a negative IQ. First, one offered to me in earnest by one of our crewmen yesterday: Hiltorel are not averse to sunlight. They have large eyes, yes, but that doesn't mean they can't control the amount of light they take in. The moron was actually suggesting we try to blind them in combat using mirrors. Unrelatedly, he met with an unfortunate accident this morning. Pity. Finally, hiltorel do not drink human blood. At all. They are an omnivorous species. They are fine with crossing rivers, silver crosses mean nothing to them, and they can, in fact, enter your house without asking. Some of you inner-world dipshits haven't had contact with them for centuries, and it shows. By the gods, it fukcing shows.

What you should come away from this with is: Hiltorel are not animals. They're at least as smart as you are, and while I know that's not saying much, trust me - they will wipe you out if you give them the upper hand in combat. I hope this is at least somewhat enlightening to you miserable pieces of shit. I didn't particularly enjoy wasting my time writing this doc, but if it keeps you from trying to shine light in their eyes, maybe it's worth it in the end. Sometimes I'm surprised humanity ever got to space. If they'd all been like you, they never would have.

Here's a few hastily-thrown-together images of hiltorel, two of which were generously drawn and donated by Dinosawer and his sister. The third image is a polished version the one I originally threw together for reference in about twenty minutes, comprised of a lot of random pieces I found online and threw together. It should be noted that hiltorel do not have noses, or, likely, humanoid mouths and faces. It should also be noted that they don't have or need breasts.

Note that none of these are the "defining image" of the hiltorel species. All of them have flaws, one way or another. Hiltorel are not pretty by human standards, but they aren't horrifying monsters, either. After all, they were the galaxy's peacemakers for a while - but in a much less violent, more diplomatic way. That takes a good deal of charisma to accomplish. 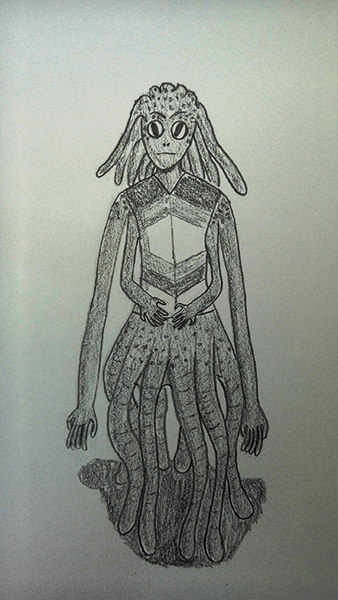 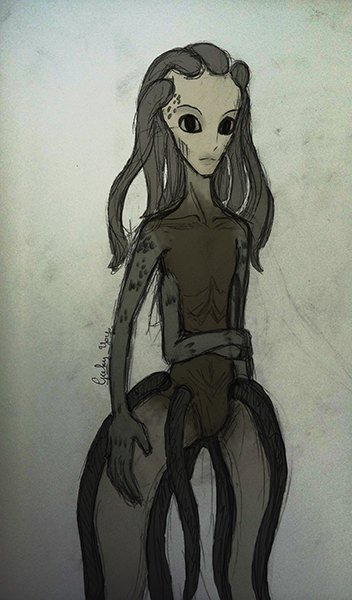 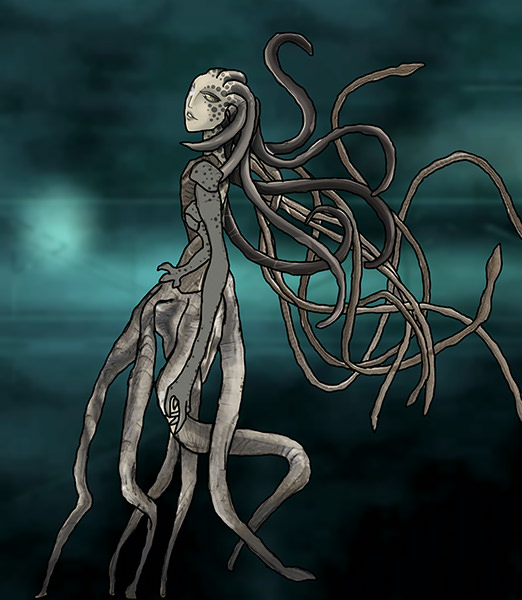 original composite
As to their stats, Hiltorel have low endurance and strength, but tend to be highly agile.
Have a question? Send me a PM! || I have a Patreon page up for REKT now! || People talking in IRC over the past two hours:

Talvieno wrote: ↑
Tue Nov 07, 2017 9:08 am
as though they were some kind of bizarre cross between a spider and an octopus

They suck, but do they swallow?


Talvieno wrote: ↑
Tue Nov 07, 2017 9:08 am
Their insides can't take much abuse, their tentacles are too flexible and weak to serve as anything besides tentacles,

Gentle. Got it. I see no issue here.


Talvieno wrote: ↑
Tue Nov 07, 2017 9:08 am
They are not chickens, and they don't lay eggs regularly. Do human women plop a baby out of their crotch every morning?

If not, then clearly neither one is getting enough action.
It's Been Worse. 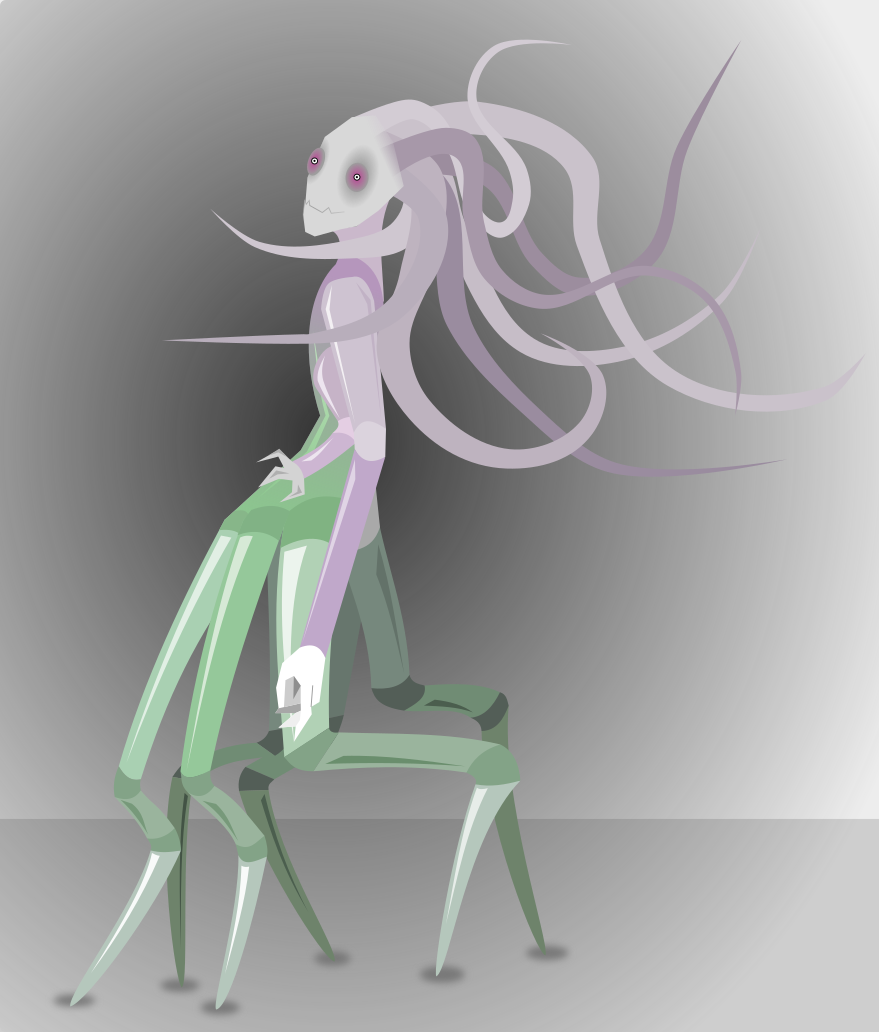 #4 by Cornflakes_91
Small caveat: i'd expect their necks to be a bit more massive to support the weight of those tentacle masses.

And body/head structure more aligned along their long axis because thats the axis along which their probably aquatic ancestors would have aligned their main sensory organs with.
Short i'd expect them to be able to look upwards while walking very easily or at least be a bit more biased in that direction than humans.

I'd also expect their head tentacles to be clustered around their mouth region rather than away from the mouth and the primary sensory input.
Because they'd likely use them to assist while eating.
Think davy jones from the pirates of the carribean to be a good impression of that

#5 by Talvieno
I'm working on remaking the hiltorel page. Which of the above pictures do you guys think would be best on the wiki? I'm looking entirely for a show of hands. I'll even make a poll.

#6 by Triggerhappy
Does 'the above' include mine? If so, I can work on it and make the corrections that Assflakes suggested ( those suggestions all make sense, but I just never got to them

) and any changes that anyone else wants to suggest.

#7 by Talvieno
I made the poll.