by Talvieno
Interested to hear your thoughts on the game, Flatfingers, if you've played more of it.

by Flatfingers
I'm enjoying it so much that I keep playing it when there are other things I should be doing.

At this point I've explored all the nearby systems I can reach, and I've blocked off as much real estate as I can, and I've hit a point where I've grabbed most of the systems I could reach that have strategic resources. There are two other civs who can still expand, which I find annoying because they don't seem to be suffering from Empire Sprawl as I am. Also, everybody else seems to like each other enough to do diplomacy, whereas all but one of these civs hate me. So that's a part of the game I'm effectively cut off from enjoying. (Maybe I wasn't nice enough to everybody the instant I met them?) 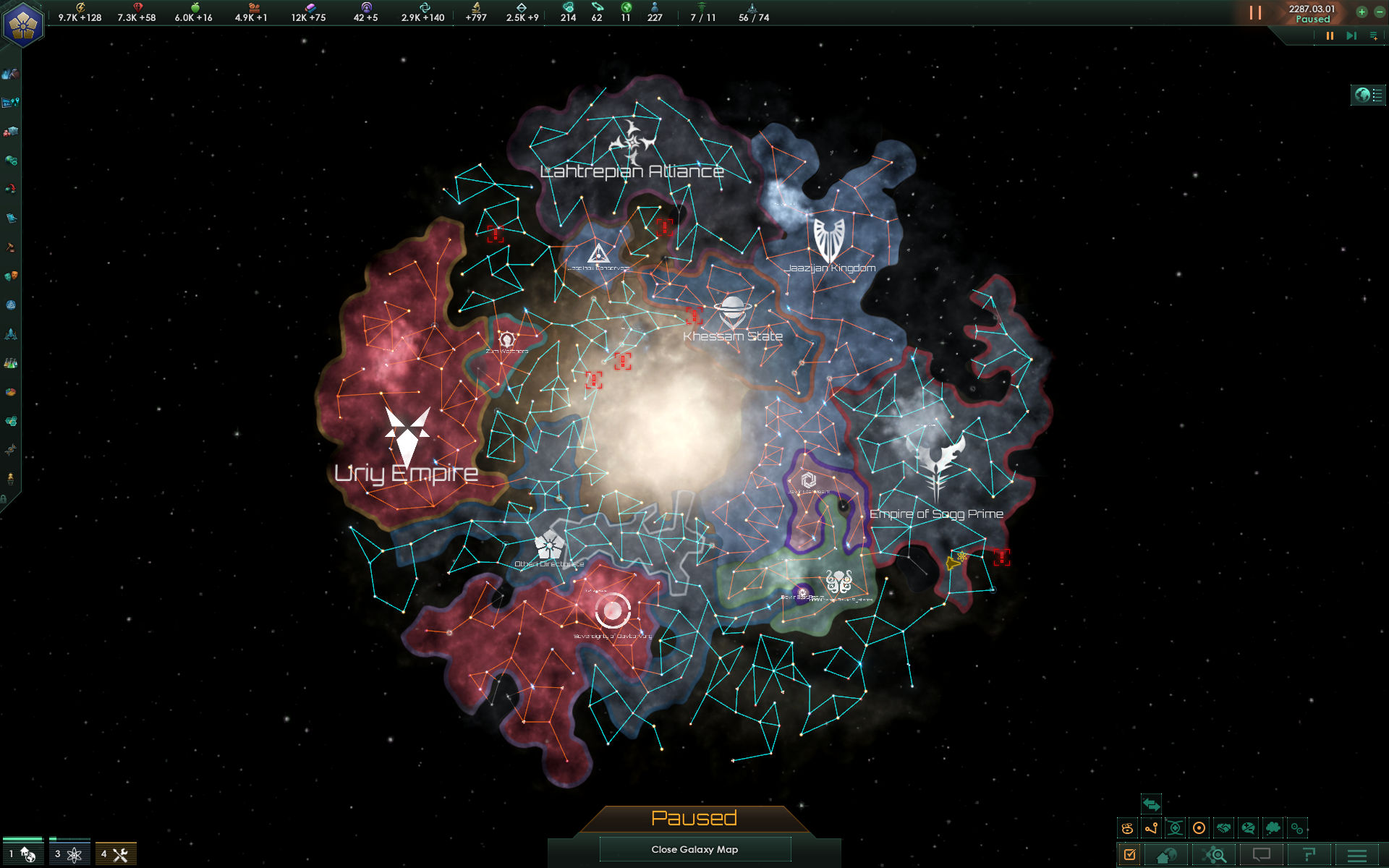 So I'm now in what I imagine is the mid-game, which seems to be about managing the growth of my colonies. (The update that just went out tonight appears to have made that harder!) And replacing dead centenarian leaders. And staying out of wars. And, from what I've read, waiting to be pushed into dealing with some Crisis, which I'm not looking forward to.

But I keep playing.

It's definitely got some of that "just one more turn" thing going on.

by Silverware
Yeah, the first few patches/DLC was about improving the early game mostly.
And now they are working on the mid game.

I'm looking forward to playing with the new DLC tonight myself, and would be keen on a multiplayer game this weekend myself.

As usual, I am happy to host such, as I have all current DLCs and Packs, and that means that ANYONE joining can play with all of them.

Even if you don't own em.

by Dinosawer
I may be up for that, I'm mostly free this weekend

I probably suck though

I probably suck though

Thats fine, we all do. I once enslaved myself. :V

by lobosan
I still can't get over the 2.0 release changes. Stellaris went from a unique, asymmetric, single player-centric, make-your-own-story empire building game to a aggravatingly generic and multiplayer-centric one. Sure, it made a lot of people happy; but, where others may see fair balance, I just saw planned single-player frustration (a la lowest common denominator). I came late to CK2 and always wondered about the salty reviews from long time players. Now I understand

lobosan wrote: ↑
Mon Jun 10, 2019 8:48 pm
I still can't get over the 2.0 release changes. Stellaris went from a unique, asymmetric, single player-centric, make-your-own-story empire building game to a aggravatingly generic and multiplayer-centric one.

i still have no idea how the changes they did are supposed to do that.
the only thing that changed in my perception is that the galaxy got structure and increased in effective size.
everything else was perceptually untouched.

Cornflakes_91 wrote: ↑
Tue Jun 11, 2019 2:56 am
i still have no idea how the changes they did are supposed to do that.
the only thing that changed in my perception is that the galaxy got structure and increased in effective size.
everything else was perceptually untouched.

Some of the 1.9 to 2.x changes that made it in my perception a less interesting game was the removal of the 3 unique FTL travel methods, the homogenization of player species, and the introduction of rules/methods that made conquest play or empire expansion more frustrating (war attrition, etc.). It's as if the developers removed the outliers/extremes I enjoyed to squeeze game play into a more normalized distribution - good for multiplayer & competitive scoring, bad as a story engine.
Admittedly, I haven't tried it in a year but the more constructive negative reviews I have read keep mentioning a growing gap between AI capability and new DLC features. Again - not a problem for multiplayer but I am single player.

That's not the case anymore (although Silverware assures me that there are DLCs available that'll fix that.

by lobosan
OK. I'll give it a shot. Any must-have mods for sentimental 1.9 curmudgeons?

Unfortunately no, there are mods that slow down combat so that it matches the slower movement speeds.
But nothing can add the old movement systems back in yet.

The planet updates themselves are a significant improvement over pre2.0, the tiles system of the old mode sucked.
And now you can have populations in the hundreds (or low thousands) for a single planet.

We are still waiting for the economic overhaul, but the existing replacement of the old strategic resources is a godsend, much more useful long term, and much more reason to fight over them.
With limited numbers of building slots, you want to level you buildings as they then allow more than double the population to work those jobs, but also generally require the special resources as maintenance, as do all ships and equipment from early mid game.

One worthwhile mod is Planet Modifiers, it's perfect to include in every game. As then ALL planets become far more interesting.
More Events is the only other one I'd universally suggest.

by FormalMoss
Just bought Stellaris for Xbox.
Don't think it has Multiplayer.

by Cornflakes_91
...why would you do that? why would you buy the console port of a game that runs into limits on PCs?

It does. But console edition does not play with the PC edition, they are VERY different beasts.
Sauce: https://console.stellaris.com
All times are UTC-06:00
Page 27 of 28
Powered by phpBB® Forum Software © phpBB Limited
https://www.phpbb.com/