BFett wrote:Did you get that by setting up each race individually and then telling the game to only use player made factions?

Yep, just set all the custom factions to force spawn, then even if you tell it to use less AIs in a match than you have force spawned empires, it will randomly choose from the force spawn ones. They all have unique ships too, looks like the Mandalorians got screwed though. They have only had that many planets since I first found them. 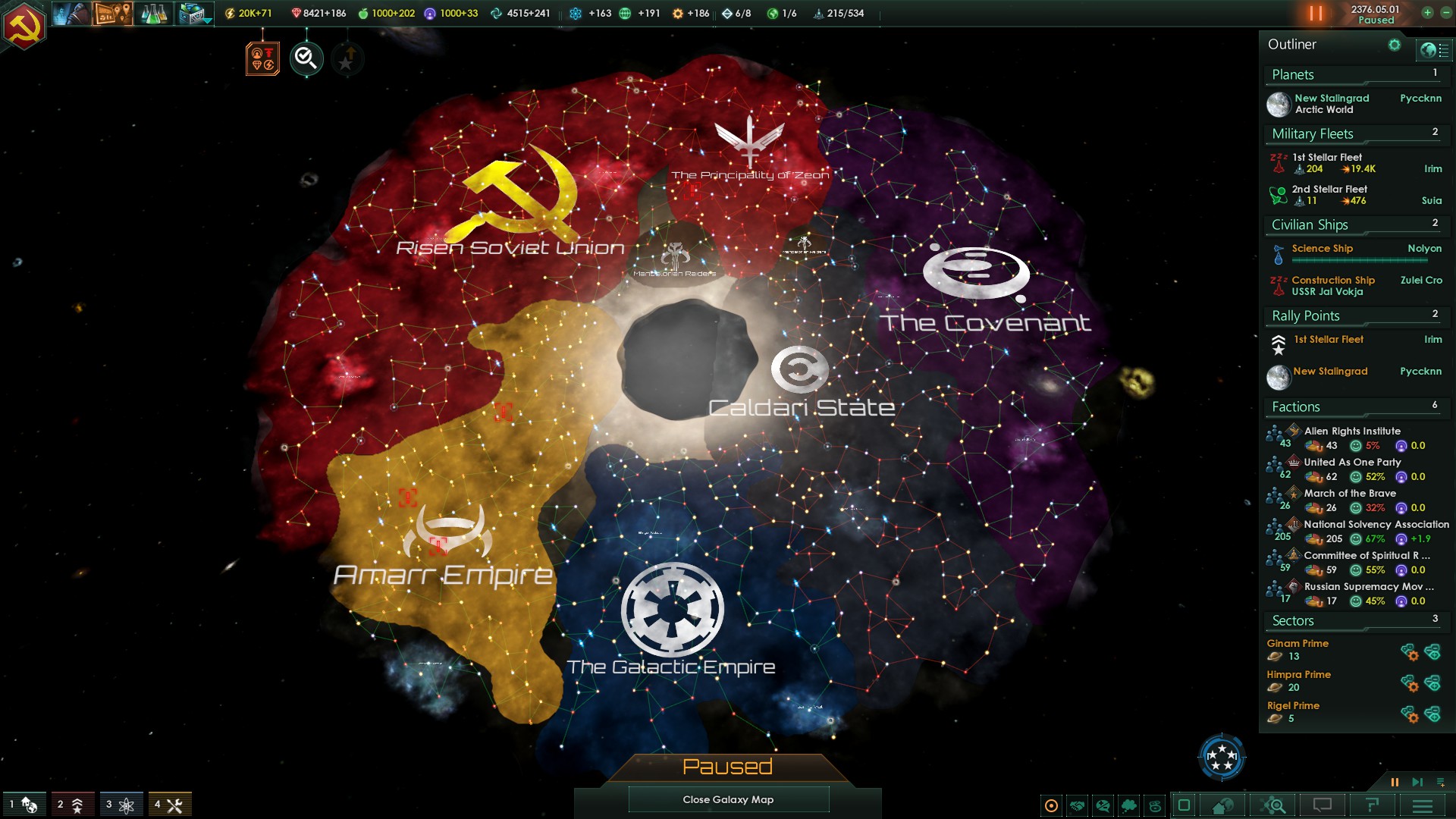 Universe mashup, this is why I love Stellaris. Who you think will win?

You have the covenant, but no UNSC? Disappointed!

#213 by MrPerson
Oh I have them, but I have like 12 factions I told it to randomly choose from, but only told it to put 6 or so AIs into the game when I started. Its just not one of the ones it chose I guess.

#214 by Silverware
Seeing as Synthetic Dawn releases this week.

Who would be keen on another megagame. But this time, we split into two teams.

One team of squishy meatbags who avoid all robotics.
The other as Robots, bent on consuming/destroying all organic life.
°˖✧◝(ಠ‸ಠ)◜✧˖°
WebGL Spaceships and Trails
<Cuisinart8> apparently without the demon driving him around Silver has the intelligence of a botched lobotomy patient ~ Mar 04 2020
console.log(`What's all ${this} ${Date.now()}`);

Who would be keen on another megagame. But this time, we split into two teams.

One team of squishy meatbags who avoid all robotics.
The other as Robots, bent on consuming/destroying all organic life.

I am in. Team Robot!
It's Been Worse.

#216 by JanB1
I would like to play too. Sorry for kinda abandoning our last game.

Team Robot. The Alari strive for the future of the mind in the cloud where (robotic) bodies are a mere tool to do things!
Automation engineer, lateral thinker, soldier, addicted to music, books and gaming.
Nothing to see here

#217 by Silverware
I was thinking of randomizing the teams beforehand, or everyone is going to pick Robosquirrels.
°˖✧◝(ಠ‸ಠ)◜✧˖°
WebGL Spaceships and Trails
<Cuisinart8> apparently without the demon driving him around Silver has the intelligence of a botched lobotomy patient ~ Mar 04 2020
console.log(`What's all ${this} ${Date.now()}`);

#218 by Triggerhappy
Would Team Hivemind be a fun addition? That way it can be a three way game rather than a 2 way battering.
It's Been Worse.

#219 by Talvieno
I like the three-way idea.
Have a question? Send me a PM! || I have a Patreon page up for REKT now! || People talking in IRC over the past two hours:

If we get a number of players that is not a factor of 3, we can always just have the all-consuming hivemind be the more powerful nemesis over the two other sides - seems like a fun plan to me

Team Bug, Team Human, and Team Robot!
It's Been Worse.

#221 by Silverware
... I did always want to do the Super Powered Hivemind vs everyone.

But that sounds fine.

I'll do hivemind Organics then.

Then I don't have to have you bastards not trust me. :V
°˖✧◝(ಠ‸ಠ)◜✧˖°
WebGL Spaceships and Trails
<Cuisinart8> apparently without the demon driving him around Silver has the intelligence of a botched lobotomy patient ~ Mar 04 2020
console.log(`What's all ${this} ${Date.now()}`);

#222 by BFett
Hmm, I might want in on this depending on when it will happen. Just consider me a weak ally who will unwillingly hinder progress of whatever faction I join. Gosh, I haven't played in months.

#223 by Triggerhappy
Yall don't start without me! I'll be on later in the day.
It's Been Worse.

"We are the Borg. Lower your shields and surrender your ships. We will add your biological and technological distinctiveness to our own. Your culture will adapt to service us. Resistance is futile"

#225 by Triggerhappy
Suggestions for the game, Trigger edition:

Roleplay Ideas:
To be followed in general, lightly, not to the absurd in order to keep it fun:

- Team Human - Medium expansion priority, balanced research/resource goals, none-aggressive, with possibility to turn robotic if so wished, could trade with team Robot
- Team Bug - No diplomacy, no trade outside the team, goal is to expand as quickly as possible, and to destroy anyone they meet, not words said. Cannot be negotiated with.
- Team Robot - Research focus, less planetary expansion focus, could be the tricky traitors willing the betray the other two.

In my head, each team would coordinate as one, and generally aim to follow the roleplay guidelines, just for the fun of it.
Ideally, each team would also have it's own voice chat in discord.