Thanks for that, Cornflakes.

Thanks for that, Cornflakes. 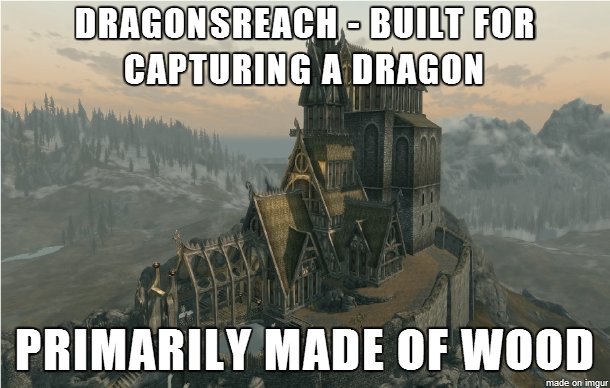 also, this; linked in the comments

#739 by Cornflakes_91
Everyone is a stealth archer.

Thanks for your contribution, Baile nam Fonn. I'm glad to see how much the Thalmor are detested and how poor they are at stealth archery. I gladly use my skill as a stealth archer to shoot the arrogant bastards down.

Victor Tombs wrote:I gladly use my skill as a stealth archer to shoot the arrogant bastards down.

#742 by Flatfingers
As a dedicated stealth archer, I approve of the descriptions of the races of Tamriel. (Except that I'm guessing they're actually from Elder Scrolls Online?)

#743 by Victor Tombs
I tried to like Elder Scrolls Online, Flat, but it just didn't work for me.

I was somewhat shocked to learn, whilst chatting in IRC, that Josh didn't enjoy Skyrim. It transpired that he was talking about the vanilla game which I admit I would have a hard time with now. When I got my free copy of the SE version I was severely underwhelmed by how poor it looked and played compared to my heavily modified original. I can't blame him for preferring his first love Morrowind though.

And then it turned into a coders convention and I kept falling asleep. It still amazes me how anyone can get so excited by the subject but I'd be having a much poorer experience in life if they didn't.

#744 by Flatfingers
Honestly, I miss Morrowind, too.

I've actually been thinking about this recently, as I plow once more through the entirety of Skyrim SE and its DLC in vanilla mode (because I decided that this time I'd actually try to collect achievements, and modding Skyrim disables achievements).

I'm still considering arguments and counter-arguments on this subject, but right now I like the theory. For starters, consider movement in these three TES games. In Morrowind, there were spells to levitate and jump. With plenty of magicka, you could levitate your way anywhere for long stretches of time. Even better, you could (and I did) enchant a "jump suit" that let you leap across nearly half the island of Vvardenfell in one mighty flight. (Take that, cliff racers!) In Oblivion, levitate was gone, and jumping was nerfed to a maximum (with lots of Acrobatics and the Boots of Springheel Jak) of letting you leap to the top of a house. A short house. In Skyrim, there's no levitation or meaningful upward jumping of any kind. About the closest equivalent is the Whirlwind Sprint shout or the "Bats" mode of a Vampire Lord if you have the Dawnguard DLC installed, and even these aren't jumping -- they're basically the Blink ability from Dishonored. As I've mentioned before, I think this means that in TES VI our only movement option will be to crawl on our bellies like slugs.

The main thing affecting this trend toward less movement capability in each new TES game is the gradual elimination of the power of magicka. The list of spells in Morrowind was crazy, and the combinations were fantastic. Even in Oblivion you could, right from the character creation screen, access and mix a wide array of individual magical powers. This also applied to Enchanting. In Skyrim, magic abilities are sharply reduced in number and clustered in schools, and even at high power levels are weak relative to leveled-up archery and melee abilities.

Let's say for the moment that there's something to this analysis. What of it? Does it matter? Well, if you happen to prefer sword-and-board play, nope, it doesn't matter. You might complain loudly that melee combat in Skyrim is lame compared to Dark Souls, and you might even be right, but even if the mechanics are simple and boring, the "feel" of melee combat in Skyrim -- the moves, and sounds -- is actually pretty nice. Given that TES games (and Fallout 3 & 4) are really about exploring a large open world with occasional combat events, melee combat in Skyrim is about as complex as it needs to be mechanically, and clearly has had a lot of attention paid to its presentation.

But what if you like playing with magical powers, as a reasonable person might want to do IN A FLIPPIN' FANTASY GAME? Well, too bad for you, I guess. Maybe Bethesda has decided that magicka is just too overpowered, or that it's too complicated to implement on consoles, or they think they're responding to player comments wanting less magic and more melee, or they're just plain bored with magic compared to the delight of whacking things with sticks.

All I can see is that if you like playing with lots of combinations of lots of magical powers in a large, open-world fantasy game, Skyrim is less fun than Morrowind. I have no idea if this approximates Josh's experiences with these games, but it's certainly why I prefer Morrowind in terms of mechanics and dynamics. (Skyrim wins easily on visual and audio aesthetics, which is why I'm keeping an eye on Skywind.)
Victor Tombs
Victor Tombs
Elder Council Member

#745 by Victor Tombs
You're far more interesting than the coder convention, Flat. That's a great analysis of the differences in the games and I don't disagree with anything you say. I haven't played any of the games as a pure magician. In fact I much prefer "the delight of whacking things with sticks" or long distance killing with my bow and arrows.

It could very well be the case that Josh prefers magic. I know his most impressive contribution to Morrowind was a farming mod so maybe that's an indication of how he enjoys playing the game. I know he likes exploring because that was top of his list for ESO. In fact it was probably more a case of nostalgic wandering as his main goal was to revisit those places he had enjoyed in Morrowind. He did give the impression that he would be more at home at Hogwarts rather than somewhere like West Point.

I too am looking forward to playing Skywind but it's unlikely I will be trading in my preference for a powerful sword or bow in exchange for a pointy stick.

Flatfingers wrote: I've actually been thinking about this recently, as I plow once more through the entirety of Skyrim SE and its DLC in vanilla mode (because I decided that this time I'd actually try to collect achievements, and modding Skyrim disables achievements).


There is a mod for that

Agree with flat, which is why I have a ton of magic mods

I've never seen any added achievements in my modded game, Dino, but that's probably because all my achievements were accrued during my long hours in the pure vanilla game. It was gamers here who encouraged me to get involved in modding my game. Another reason why I find this Community interesting.

#749 by Flatfingers
I knew someone was going to mention the "mods + achievements" mod.

I'm not using it because it requires installing a DLL. I barely tolerated that for the ENB graphics; I'm not about to accept it from an even more random stranger.