#1 by CSE
...but it would be a shame not to share the asset prepared for the contest, wouldn't it?
(indeed this was my strategy: I continuously created assets without particular plan, as the mood and fun pushed me; then when a new contest was announced, I scripted a scenario and realised it mostly re-using those assets; this explains why my entries where usually quite early in the month, as the heavy workload was made in advance).

So here are some elements that I prepared to be used in a future competition: 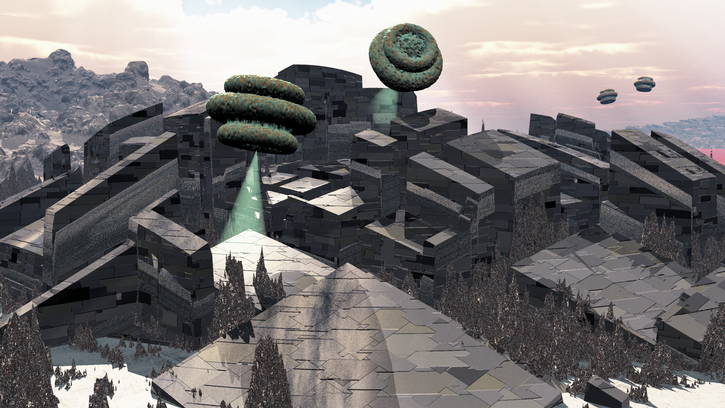 Link to higher definition.
This older image has not the quality of future work (mostly the "spaceship" are ridiculous), but is interesting because of the use of two custom "landscape" functions to create the city and the "alien" vegetation (using a texture with transparency - no I did not have any "ecosystem" at that time

). This is a basis work that led to the cloud city below. 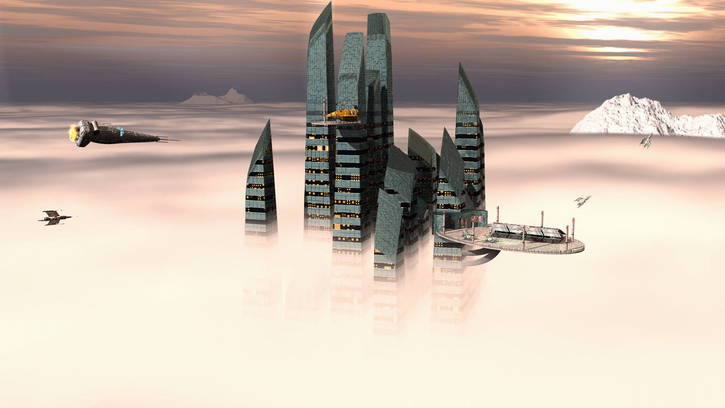 Link to high definition.
The city is made using a fractal landscape with a custom function, and there is an interesting material with many layers for the texturing. This is "procedural" in the sense that the only "models" are the spaceships.

Link to very high definition.
This is by far the most complex model realised completely within vue. It contains meta-blobs, lot's of boolean primitives and even some "landscapes" with custom function for the "greebles". The laser beams are volumetric lightings and the explosions are billboards. The green planets is stolen somewhere on the web...

Link to high definition.
I was trying to start developing different "families" of spaceship for different species. This ship is a carrier for a race where all kids are twins telepathically linked and therefore all structures come in pairs. The carrier can split into two identical halves. The "white" destroyers can leave the structure and the 2x2x2 reddish fighters join the fray.
This ship has been used in the last LTFC as "pirate" hidden in the asteroids.
The other species under development were a "technical" (angular, metallic, see the white fighters/escort in the last LTFC) and a rounded mirror one, that can be glimpsed in the next picture. 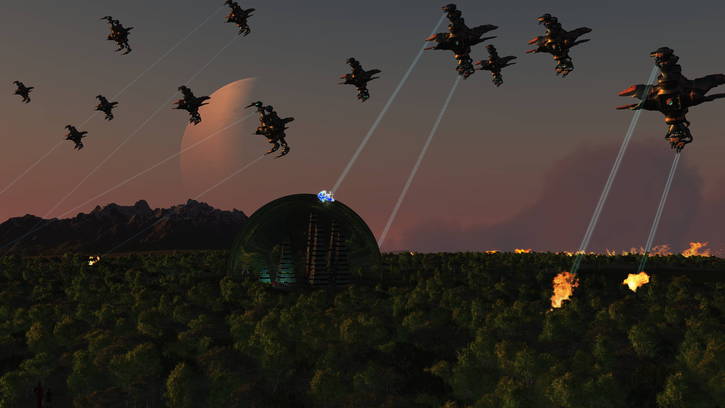 Link to very high definition.
This is the latest creation, using vue 2016 and ecosystems for the forrest. The ships are now designed in Wings3D (why did I ever spend so much time modelling with primitive directly in vue?). The city is as usual a custom function and the fires are billboards. The laser beams are glowing material (as opposed to the previously used volumetric lighting). The colours are on purpose washed out. This is an end-of-world ambiance. See the two spectators?


You are welcome to comment but even more to post your own rendering/images/songs/stories here.
This ain't no contest, but who did it for the prize money, anyway

#3 by Lum
Those look fantastic. Kudos!!

Then you need a day job

#5 by Cha0zz
I love the space station, very nice CSE!

#6 by Detritus
...I like the one with the spaceship in it.

Some awesome stuff there, I actually really like Friendly Visit.... The oddness of the spaceships doesn't bother me at all

And the landscape is really nicely done.

It's a shame about the LTFC, I was really looking forward to read/listen/watch more of your stuff.
And while I came late to the party, it still gave me the inspiration for a couple of songs, so for this I say Thank You

As for content, I never prepared anything for future contests but I have a bit of scrapped content:
For the first LTFC, the Industrial one, I actually wanted to create an Industrial Themed Faction and compose several songs for the faction.
It was supposed to be like the faction soundtrack of Freelancer, so you had one calm song, a faster song when enemy appears and a fast song for actual action.
I actually produced four tracks, dubbed area, calm, enemy and action which were variants of one base song with different instruments and speed.
In the end I scrapped the entire project and remade the entire thing, you can listen to it here
While it wasn't bad I felt that it didn't fit to LT so I made another song in a couple of days, the one that I then released here.

For the Escort theme I first took another song of mine and added bagpipes to it to get a "feeling" for the whole project. Again I scrapped the first iteration and made another one that I released.

Zennofska wrote:In the end I scrapped the entire project and remade the entire thing, you can listen to it here

A pity you dropped the project... it sounds cool (not only the project, but also the music!) and would be very interesting to listen to different moods in one style and different styles in one mood.

I did it for the feedback on my writing! ill get it where i can take it!
There is no peace, only passion
10 posts
Post Reply